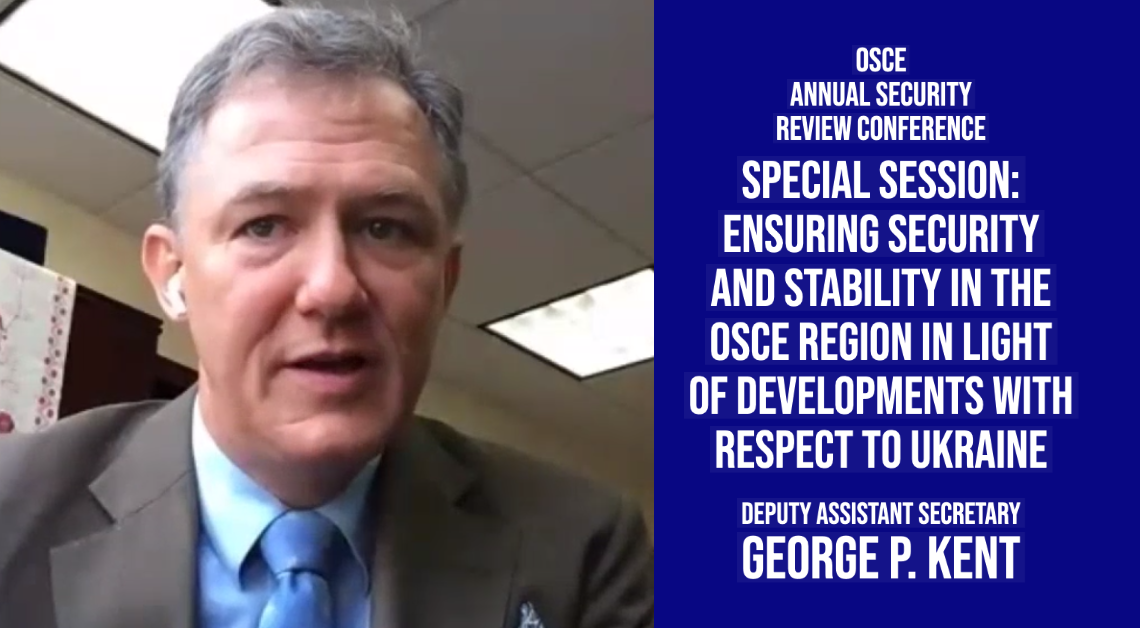 We do not, nor will we ever, recognize Russia’s purported annexation of Crimea. We reaffirm that Crimea is Ukraine.

Special Session: Ensuring Security and Stability in the OSCE region in light of developments with respect to Ukraine

I would like to thank all colleagues who have previously spoken and who are genuinely attempting to resolve the challenges we are discussing in this session.  To respond to our Russian colleague’s assertions, Russia is one of the parties to the conflict, and one of three members in the Trilateral Contact Group, along with the OSCE and Ukraine, based on the negotiations President Putin attended in Minsk in February 2015.

Russia’s ongoing aggression in eastern Ukraine, its occupation of Crimea and the ensuing human rights abuses and humanitarian crises it has perpetrated there, and its egregious and destabilizing violations of sovereignty and territorial integrity, reverberate throughout the OSCE area.

This spring, we witnessed the largest massing of Russian troops and equipment in occupied Crimea and along Russia’s border with Ukraine since Russia’s 2014 invasion.  Russia failed to provide any substantive response to Ukraine’s legitimate request under the Vienna Document for more information on this unusual and provocative military activity and has not provided any reasonable explanation for its actions.  While Russia has repositioned a portion of its military forces and equipment, its force posture remains elevated along the Russia-Ukraine border, on Ukrainian soil in Russia-occupied Crimea and in Russia-controlled territory in eastern Ukraine.  It continues to impede freedom of navigation of vessels in the Black Sea and Sea of Azov, in violation of international law.

Ukraine has clearly demonstrated the political will to find a peaceful and diplomatic resolution to the conflict.  In contrast, Russia has denied its own involvement in this conflict, which has claimed more than 13,000 lives​, wounded tens of thousands, including ten Ukrainian servicemembers wounded by Russia-led forces’ shelling of Avdiivka this past Saturday, and precipitated a humanitarian crisis that has directly affected more than six million Ukrainians— both in Crimea and in eastern Ukraine.  Rather than meet its obligations under the Minsk agreements and pursue any real effort towards conflict resolution, which would save lives and end more than seven years of human suffering, Russia falsely portrays the situation in eastern Ukraine as an “internal” crisis and insists Ukraine negotiate directly with Russia’s proxies, propagating disinformation about “foreign management” and “coups d’état.”

The OSCE’s Special Monitoring Mission continues to play an indispensable role as our eyes and ears on the ground.  Yet Russia-led forces regularly block, and at times harass and threaten, the SMM’s international monitors.  These forces also routinely jam, fire upon, and occasionally shoot down SMM UAVs.  The United States condemns all attempts to interfere with, damage, or destroy the SMM’s valuable technological assets.  These actions are unacceptable, and those who target the Mission’s assets should be held accountable.  The United States calls upon Russia to direct the forces it arms, trains, leads, and fights alongside in eastern Ukraine to cease their harassment of the SMM.

Despite Russia’s efforts to block the SMM, as well as international humanitarian organizations, from operating in Crimea, we continue to hear stories about the tragedies of life under Russian occupation there.  We urge Russia to end its occupation of Crimea, to cease its harassment of Crimean Tatars, ethnic Ukrainians, the Orthodox Church of Ukraine, and other members of ethnic and religious minorities in Crimea, and to release all political prisoners from Ukraine it holds in custody.

OSCE’s Observer Mission at Gukovo and Donetsk also provides valuable on-the-ground, fact-based information and helps build confidence through increased transparency by observing and reporting on the situation at these checkpoints, including movements across the international border between Ukraine and Russia.  Point IV of the Minsk Protocol delineates a clear role for the OSCE to monitor and verify both sides of the Russian-Ukrainian international border, and to create a security zone in the border areas of Russia and Ukraine.  There are strong linkages between ceasefire monitoring and border monitoring, and it is to the detriment of all efforts to resolve the conflict that the OSCE approach to these activities has been impeded by one participating State.  We regret Russia’s recent decision to shorten the mandate of this mission to only two months, which will introduce further uncertainty regarding its status and distract from its efficiency.  We hope all participating States will join consensus on—at the very least—a four-month-extension of the Observer Mission’s mandate period.

The United States fully supports Ukraine’s sovereignty, independence, and territorial integrity within its internationally recognized borders.  We do not, nor will we ever, recognize Russia’s purported annexation of Crimea. We reaffirm that Crimea is Ukraine.  We congratulate Ukraine on successfully hosting the inaugural Crimea Platform summit August 23, in which we were proud to participate.  We join our European and other partners in affirming that our eastern Ukraine-related sanctions against Russia will remain in place until Russia fully implements its Minsk commitments.  Crimea-related sanctions will remain in place until Russia returns full control of the peninsula to Ukraine.  We call on Russia to fulfill its Minsk commitments, including with regard to support for the Border Observation Mission, and to cease interference with and harassment of the SMM.