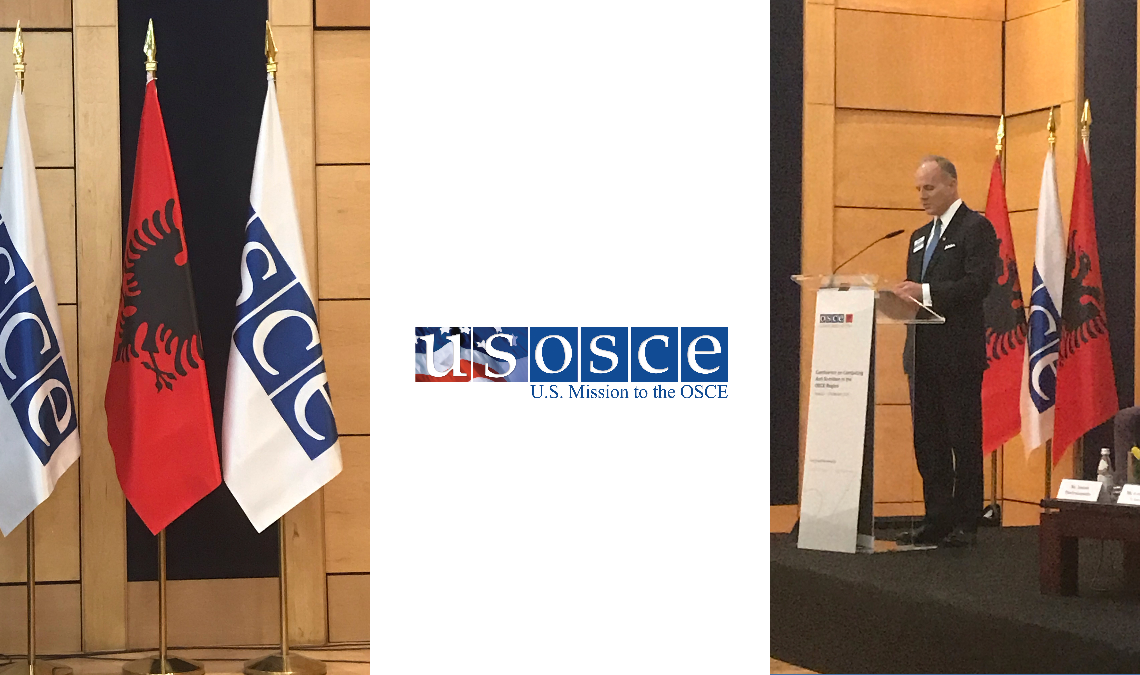 Mr. Chairperson-in-Office, Prime Minister, and Minister for Foreign Affairs Rama; colleagues; and all who have gathered here to condemn and combat anti-Semitism in all its forms; it is an honor to be with you.

The United States applauds Albania for its leadership in holding this important meeting early in its OSCE Chairmanship year. The timing of this conference is especially significant because, throughout the world, we are commemorating International Holocaust Remembrance Day on the 75th anniversary of the liberation of the Auschwitz-Birkenau death camp. We remember the Albanian people’s noble role in rescuing and protecting Jews during the Holocaust. May our deliberations here take inspiration from their humanity and courage. Just as those righteous souls took action against evil in their time, so must we rise to the challenge in ours. In the spirit of “besa,” may we do our part to stand against present day anti-Semitism, confront all manifestations of hatred, and defend the human rights and dignity of all.

The United States is committed to combating hatred and intolerance in all its forms. Today, we are addressing that most relentless form of hatred: anti-Semitism. I have the great privilege of representing the American people and a President, Secretary of State, and Administration that have made the fight against anti-Semitism a top global priority.

As President Trump declared on January 27, 2020, International Holocaust Remembrance Day: “we remember the millions of precious souls who perished as a result of the horrific crimes perpetrated by the Nazi regime. We also reaffirm our steadfast commitment to confronting the vile poison of anti-Semitism wherever and whenever it arises.”

Anti-Semitism continues its alarming global rise, mutating into new forms and spreading with unprecedented speed via new technologies. We see Jews vilified, demonized, and physically attacked throughout the world. Holocaust denial persists, flying in the face of established historical fact. In some countries, notorious anti-Semites are rehabilitated and honored as national heroes. And some states deliberately distort the history of the Holocaust and World War II to serve their own contemporary political ends. The rise in anti-Semitism is coupled with rising hatred and intolerance directed against other ethnic and religious groups and vulnerable communities throughout the world.

In November of 2019, the Anti-Defamation League (ADL) released a survey of anti-Semitic attitudes that included 14 European countries. One of the survey’s key findings was that roughly one of every four respondents fall into the “most anti-Semitic” category, meaning that they subscribe to a majority of the anti-Semitic stereotypes. We see a disturbing erosion of Holocaust understanding. A 2018 CNN poll on European attitudes toward Jews found that 34 percent said they knew just a little or had never heard of the Holocaust.

I was pleased to attend last September’s OSCE Human Dimension Implementation Meeting, the HDIM, in Warsaw, where I spoke about U.S. efforts to combat anti-Semitism globally. Tragically, in the few short months since that meeting, we have seen lethal anti-Semitic attacks in Monsey and Jersey City in the United States and in Halle, Germany. I have visited traumatized Jewish communities that contend with anti-Semitic incitement, vandalism, and street violence.

We must do all that is within our power to combat this scourge.

We applaud those governments and organizations that have named coordinators for combating anti-Semitism. The designation of anti-Semitism coordinators is essential to the fight against anti-Semitism because, not only does it signal the importance of the issue, but also that action is imperative.

To take action, governments, law enforcement officers, courts, educators, and the public must be able to identify anti-Semitism in all of its manifestations, both age-old and contemporary. The International Holocaust Remembrance Alliance (IHRA) working definition of anti-Semitism and its examples have been a watershed. The definition identifies both traditional and contemporary forms of anti-Semitism. In December, President Trump issued an executive order directing U.S. government agencies to take into consideration the IHRA definition and the contemporary examples in the context of Title VI of the U.S. Civil Rights Act and fighting anti-Semitism on U.S. college campuses. A growing number of OSCE participating States apply the working definition. We urge all those that do not yet use the IHRA definition to do so. We commend ODIHR for using it.

In addition to encouraging countries to use the IHRA definition, please allow me to share some of the U.S. Government’s global priorities for combatting anti-Semitism:

1. Urging governments to provide adequate security for their Jewish populations and Jewish community property. Security must be a top priority, because when people do not feel safe, and when they do not feel that their children are safe, there is no quality of life.

2. Ensuring that countries properly investigate, prosecute, and punish hate crimes. Even misdemeanor crimes must be addressed, because these are often the best opportunities to intervene in the life of angry and alienated youth before they turn to violence.

3. Urging countries to remove anti-Semitic content from textbooks. Teaching innocent children to hate other children creates long-lasting damage. Educational curricula should not only teach accurately about Holocaust history and the dangers of anti-Semitism, but also teach about the important contributions of Jews and the role of the Jewish community in the history of each respective country.

4. Confronting and condemning hate speech, particularly on social media. Let me be clear: We do not support undue restrictions on freedom of expression. Even despicable hatred can be protected speech. But we must be vigilant in countering anti-Semitic speech with alternate messaging. Leaders around the world should swiftly and consistently speak out against it. The best response to hate speech is more speech, not less. My government devotes significant resources to countering anti-Semitism online. For example, we support civil society organizations in Europe that use media platforms to raise awareness of the problem, debunk false theories, and advance strong and credible counter-narratives. We encourage you to do the same.

The United States was proud to support ODIHR’s Turning Words into Action to Address Anti-Semitism, which provided tools to continue this important fight. This program – specifically designed to combat anti-Semitism – served as a model for ODIHR’s Programme for Combatting Hate Crimes, which expands the focus to address different forms of intolerance. The United States believes it is important to maintain a particular focus on combating anti-Semitism in OSCE programming.

Additionally, we need to have a clear picture of the context in which anti-Semitism exists. I cannot emphasize enough how essential the collection of disaggregated data is in helping decision-makers, law enforcement officials, and others take appropriate and effective action to prevent further incidents.

Across the world, including in the OSCE region, Jewish individuals, their places of worship and their property are targets of anti-Semitic violence. Jewish communities fear for their safety. No country – not the United States nor any OSCE participating State – is immune. No country can be complacent.

The horrors of the last century have made the OSCE region especially aware of the catastrophe that results when we do not confront anti-Semitic hatred. In Berlin in 2004, the participating States recognized that anti-Semitism and other forms of hatred “pose a threat to democracy, the values of civilization and, therefore, to overall security in the OSCE region and beyond.”

The United States seeks to work in partnership with all OSCE States, ODIHR, Rabbi Baker and his Tolerance Representative colleagues, the private sector, faith communities and civil society across the region against all manifestations of hatred.

We welcome the cooperation among the Council of Europe’s European Commission against Racism and Intolerance (ECRI), the European Union’s Agency for Fundamental Rights (FRA), and ODIHR.

With committed friends and partners, working together, we can reject anti-Semitism and bequeath to our children and grandchildren the just and decent world that they so richly deserve.