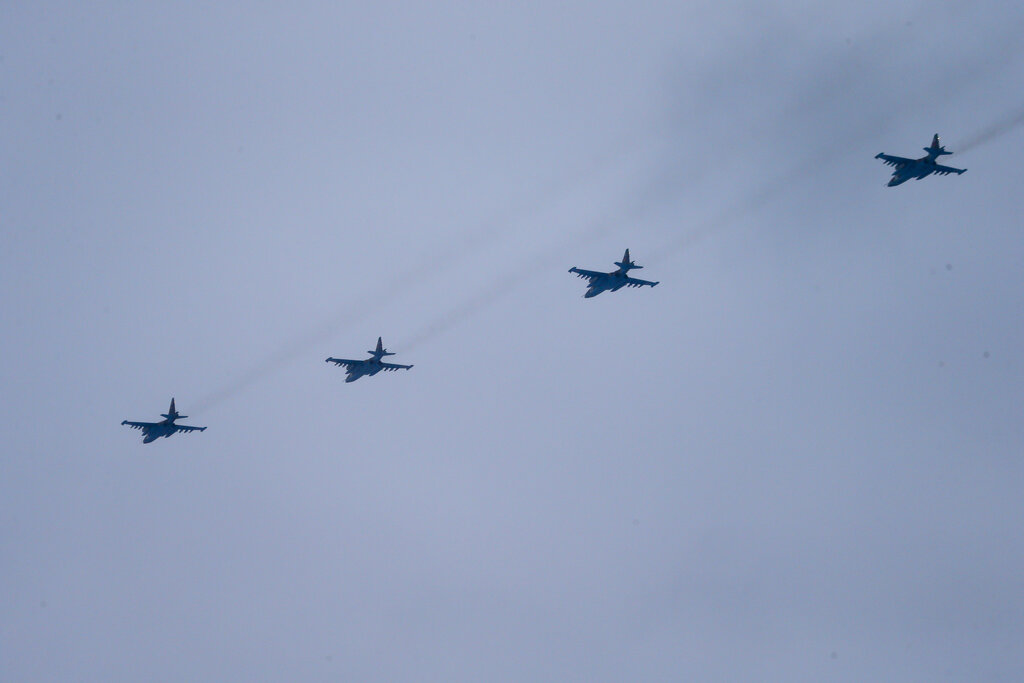 to the joint session of the Forum for Security Cooperation and Permanent Council, Vienna
February 18, 2022

The United States fully supports Ukraine’s decision to call for this joint session of the Forum for Security Cooperation and Permanent Council in accordance with the Vienna Document’s risk reduction mechanism for “unusual and unscheduled military activities.”

We assess that Russia probably has massed between 169,000-190,000 personnel in and near Ukraine as compared with about 100,000 on January 30.  This estimate includes military troops along the border, in Belarus, and in occupied Crimea; Russian National Guard and other internal security units deployed to these areas; and Russian-led forces in eastern Ukraine.  While Russia has sought to downplay or deceive the world about their ground and air preparations, the Russian military has publicized its large-scale naval exercises in the Black Sea, Baltic Sea and the Arctic. Russia has publicly said the Black Sea exercise alone involves more than 30 ships, and we assess that amphibious landing ships from the Northern and Baltic Fleets were sent to the Black Sea to augment forces there.

Colleagues, this is the most significant military mobilization in Europe since the Second World War.  Yet the Russian Federation absents itself from today’s important joint session and refuses to shed further light on its unprecedented military buildup.  Instead, it has characterized the request for clarification of its military operations under the Vienna Document, which I would remind everyone is a mechanism that Moscow voluntarily signed up to, as a “provocation.”

Rather than provide transparency and engage in risk reduction, Russia has chosen to provide disinformation and engage in denial and deception.  It cynically tries to portray Ukraine, NATO, and the United States as aggressors at the same time as it positions a massive strike force, threatening to invade its neighbor.  This of course would follow its invasion and occupation of Georgia in 2008 and its invasion and occupation of Ukraine in 2014.

We are aware that Russia is intent on creating a pretext to justify an invasion into Ukraine.  We have reports from multiple sources that provide detail on Russia’s efforts to fabricate supposed “Ukrainian provocations” and shape a public narrative that would justify a Russian invasion.  Starting several weeks ago, we acquired information that the Russian government was planning to stage a fabricated attack by Ukrainian military or security forces against Russian sovereign territory, or against Russian-speaking people in separatist-controlled territory, to justify military action against Ukraine.  Just this week, we have also seen an uptick in cyber operations against Ukraine’s defense and banking sectors.

Therefore, we must resolutely rebut the false narrative about a Ukrainian “escalation,” which finds no evidence whatsoever in the reports of the OSCE’s Special Monitoring Mission.  We must stay vigilant about the possibility of a false-flag operation to spuriously justify an attack, and beware of false claims of “genocide,” which instrumentalize a term that should never be taken lightly in this chamber.  We must be circumspect about Russia’s claims to be withdrawing units even as the Russian Federation substantially buttresses its posture elsewhere on Ukraine’s borders.

Moscow’s rejection of its Vienna Document risk-reduction commitments reinforces our grave concerns about the implications of Russia’s highly unusual military activities.  The Russian Federation is now in a position to further invade the sovereign territory of Ukraine at any moment, if President Putin so chooses.  Russia’s absence from this joint session and the previous Vienna Document meeting on Wednesday; its unwillingness to provide any credible explanation for its large, unusual, and unscheduled force buildup; and its unwillingness to notify these activities or open them up to inspections or observation under the Vienna Document is the height of irresponsibility and non-transparency.  Moscow’s silence today strikes at the very foundation of the Vienna Document.  Indeed, menacing the sovereignty and territorial integrity of Ukraine undermines the principles and commitments to which we have all subscribed in the Helsinki Final Act and the UN Charter.

To dispel our serious concerns regarding the goals of the Russian Federation’s large-scale and unusual military activities in regions adjacent to Ukraine, we sought concrete responses to the specific questions that we posed on February 15 regarding the following:

1. The precise locations of these operations. The dates of completion for the operations.

2. The number and types of military formations and units involved, as well as dates when these units will return to their permanent peacetime locations.

3. An explanation of Russia’s statement that the Vienna Document Chapter III mechanism for “unusual military activities” does not apply to this massive buildup.

5. An explanation why the Russian Federation, which – ironically enough – has itself complained about “provocative exercises” near sensitive border areas, is conducting an unannounced military build-up within mere kilometers of Ukraine’s borders for the second time in less than a year.

6. We believe it is neither credible nor possible that such a large number of Russian forces could fall short of Vienna Document thresholds for notification and observation.  We have grave concern about these highly unusual and provocative military activities.

As we have underscored previously, NATO Allies, in stark contrast to the Russian Federation today, are committed to transparency and have provided comprehensive information on their large military exercises.  This year’s Cold Response, Defender Europe, and Saber Strike exercises were all notified in accordance with Vienna Document procedures.  Allies and partners stand by their arms control and confidence-building commitments and regularly notify even their below-threshold participation in these exercises and activities.

Under the Vienna Document, we all committed to respond in good faith to the concerns that other States raise regarding unusual military activities as part of our collective efforts to reduce the risk of miscalculation, lower tensions, and build confidence.

Among such immediate steps to reduce risk of miscalculation and lower tensions, the United States recommends that the Russian Federation:

1. Answer the specific questions posed in the F10 request by Ukraine regarding the number of troops, major weapons and equipment systems, and units involved from the Russian armed forces, as well as all questions raised in the Chair’s F14 report, including those pertaining to command and control and the date of return of these troops to peacetime locations.

2. Account for all military activities associated with its deployments in the vicinity of Ukraine and other nearby neighbors.

3. Host a visit, including a helicopter overflight, under paragraph 18 of the Vienna Document, to dispel the concerns of participating States present here today.

4. Broaden the scope of its paragraph 18 actions to encompass visits under Chapter 9 and Chapter 10 verification measures, to include aerial inspections of areas of concern, and confirmation of the redeployment of all forces to peacetime locations.

5. Brief the Forum for Security Cooperation on its redeployment of forces.

6. We recommend that Russia join all participating States to endorse a full and open dialogue on modernizing and improving military transparency, which is so clearly lacking at the present time.

7. Finally, we recommend that Russia immediately de-escalate its military posture in and around Ukraine by withdrawing its troops and equipment and fulfilling in good faith its Minsk Agreement obligations.

Please attach this statement, including our recommendations to the Journal of the Day.