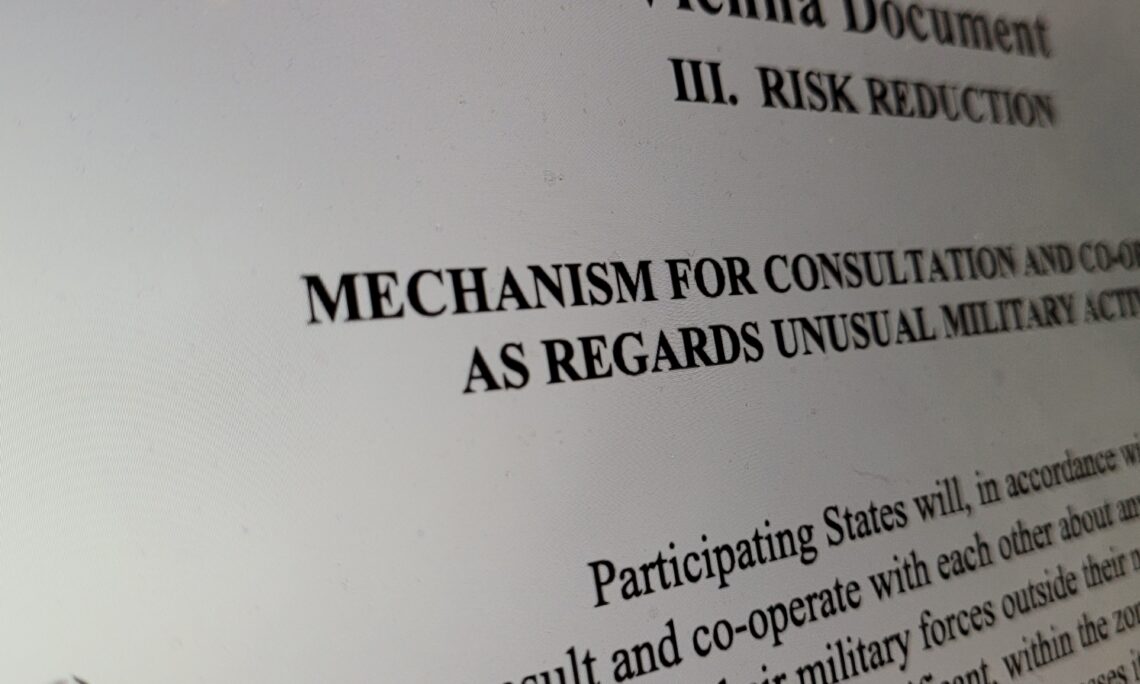 If ever there were a time to invoke a risk reduction mechanism, this is it. (Photo USOSCE)

As delivered by Ambassador Michael Carpenter
to the joint session of the Forum for Security Cooperation & Permanent Council , Vienna
February 16, 2022

The United States welcomes the decision by Lithuania, also on behalf of Latvia and Estonia, to call for this joint session of the Forum for Security Cooperation and Permanent Council in accordance with the Vienna Document’s risk reduction mechanism.

If ever there were a time to invoke a risk reduction mechanism, this is it. Russia has assembled a force of well over 150,000 troops along Ukraine’s borders, organized in over 100 Battalion Tactical Groups (BTG). Russia has also moved roughly 30,000 troops into Belarus, including special forces and equipment such as short-range ballistic missiles and anti-aircraft batteries.

We are therefore extremely disappointed that Belarus did not avail itself of the opportunity at the February 14 meeting of interested states to provide any additional transparency or clarifications or to respond to questions about its unscheduled, large-scale military exercise “Union Resolve-2022” and its other unusual military activities along its southern border. Indeed, we were dismayed that Belarus attempted to portray the invocation of the Vienna Document’s risk reduction mechanism as provocative and escalatory. Nothing could be further from the truth. This instrument exists precisely to address situations like the one we have today.

The United States had hoped that Belarus would avail itself of the opportunity to provide a substantive reply to the request for an explanation of these highly unusual military activities. Let us recall the Vienna Document requires that Belarus provide “answers to questions raised, as well as any other relevant information in order to explain the activity in question and dispel the concern.” As I said in our previous meeting, an honest and detailed explanation of this activity’s size, composition, and purpose is long overdue.

We find Belarus’s claim that the unspecified total number of participating military forces and major weapons systems in this massive exercise does not exceed the threshold established by Vienna Document 2011 to be, frankly, not credible at all. This claim is not consistent with the introduction of overwhelming numbers of Russian military personnel and equipment from the Far East Military District. Nor does it comport with public statements of Belarusian military authorities themselves that almost the entire armed forces of the Republic of Belarus would be participating in this “complex event.”

Mr. Chair, the narratives and numbers do not add up.

The Vienna Document requires notification of the arrival or concentration of forces from outside the zone of application when they meet or exceed specified thresholds. We therefore seek clarification yet again on the number of Russian military personnel and equipment from the Eastern Military District on the territory of Belarus. For the sake of transparency and risk reduction, we seek this information even if the concentrations are purportedly below thresholds.

We also seek concrete information on the activities of Russian forces on Belarusian territory, including those arrayed along the border with Ukraine, which Belarus claims are conducting “border defense measures in parts not possible for the border service and the armed forces of Belarus to reinforce.” Why does Belarus see the need for Russian troops to deploy to its southern border with Ukraine? What exactly are they reinforcing and why are they doing it now?

To dispel our serious concerns regarding the highly unusual activity on the territory of Belarus, we sought concrete responses to specific questions that we posed on February 14, regarding the following:
· Numbers of troops, battle tanks, armored personnel carriers, artillery, aircraft, helicopters, and heliborne landing or parachute assault activities, taking part in “Union Resolve-2022.”
· The failure to notify this massive exercise, including the arrival and concentration of troops from outside the Vienna Document zone of application.
· Belarus’s denial of an inspection request by Latvia under the pretext of the COVID pandemic in spite of the fact that it is conducting a massive military exercise during the very same pandemic.
· The execution of the exercise and associated activities in what Belarus has described as a single “complex event” under a single operational command.
· The command and control of Russian forces on the territory of Belarus.
· The inter-relationship of the military activities being held simultaneously in this single “complex event,” their command and control arrangements, and their objective.
· The precise numbers of Russian and Belarussian troops, battle tanks, armored personnel carriers, artillery, aircraft and helicopters taking part in “border defense measures,” their command and control, and their objectives.
· The destination and timetable for the departure of Russian troops from the territory of Belarus.

In short, we do not believe it is credible or possible that such a large number of Belarussian and Russian forces could fall short of Vienna Document thresholds for notification and observation. We have grave concerns about this highly unusual and provocative military activity, particularly in the context of Russia’s unprecedented military buildup in the region.

It bears emphasizing, as we have noted previously and as I will repeat again today, that NATO Allies, in stark contrast to Russia, are committed to transparency and have provide comprehensive information on their large military exercises. Cold Response, DEFENDER 21, and Saber Strike were all notified in accordance with Vienna Document procedures. Allies and partners stand by their arms control and confidence-building commitments and regularly notify even their below-threshold participation in these exercises and activities.

Under the Vienna Document, we have all made a commitment to respond in good faith to the concerns that other States raise regarding unusual military activities as part of our collective efforts to reduce the risk of miscalculation, lower tensions, and build confidence. We hope Belarus will reconsider its lack of transparency and selective implementation of its Vienna Document commitments, help dispel the many concerns we have heard around this table, and take immediate steps to reduce the risk of military conflict.

We specifically recommend the following:
· Belarus answer specific questions posed in the F10 request by the Baltic states regarding the number of troops, major weapons and equipment systems, units involved from the Russian and Belarusian armed forces as well as all questions raised in the Chair’s F14 report, including those pertaining to command and control and date of the return of these troops to their peacetime locations.
· Belarus account for all military activities associated with this “complex event.”
· Belarus agree to host a visit, including a helicopter overflight, under paragraph 18 of the Vienna Document to dispel the concerns of Participating States present here today.
· Belarus immediately enable Chapter 9 and 10 verification measures to include aerial inspections and confirmation of redeployment of all forces to peacetime locations.
· Belarus brief the FSC on redeployment of forces.
· Finally we recommend a return to full and open dialogue on modernizing or improving military transparency, which is so clearly lacking at the present time.