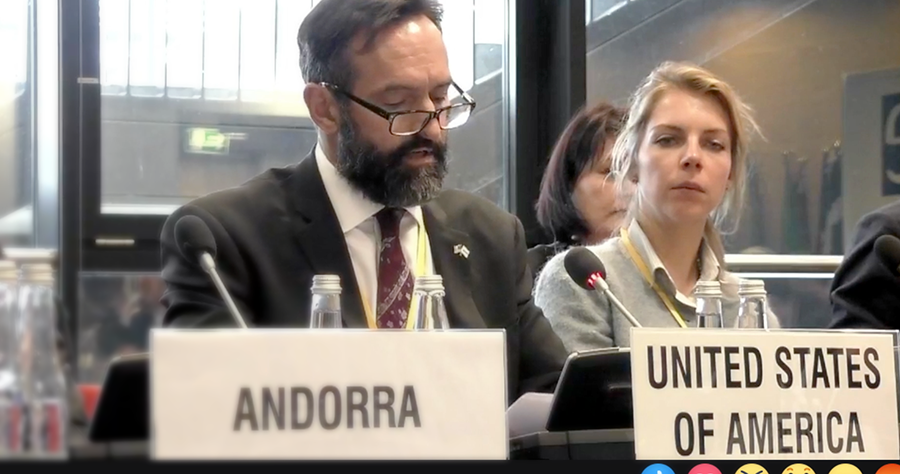 Across the OSCE region, authorities restrict the rights of individuals to express themselves freely without fear of recrimination or censorship.

In Russia, an unprecedented crackdown on freedom of expression is under way. Authorities use unduly restrictive laws such as overly broad “anti-extremism” and anti-terrorism statutes. Russia also has laws prohibiting offending the feelings of religious believers, calling for unauthorized protest, and expressing separatist views. New laws passed this year banning “disrespect” for the state and the spread of “fake news” online have given the government more tools to crack down on freedom of expression. In addition, an expanding federal blacklist of blocked websites, requirements for companies to hold data about Russian users inside Russia and provide it to the security services on demand, and bans on anonymous messaging and VPNs demonstrate Russia’s increasing surveillance of the online speech of its citizens. A new Russian law providing for a “sovereign internet” creates the potential for even greater state control over the internet.

In Turkey, authorities use broad national security and counterterrorism laws, including laws against insulting the president, to suppress the freedom of expression.  The United States joins the Council of Europe in urging Turkey to comply with the European Court of Human Rights’ ruling finding the conviction of former co-chair of the pro-Kurdish Peoples’ Democratic Party and presidential candidate Selahattin Demirtas violated his human rights. Turkish authorities have held Demirtas for nearly three years on a terrorism conviction the Court determined violated his right to freedom of expression. The United States is concerned that prosecutors are seeking life sentences against 16 civil society, media, and business leaders allegedly involved in the 2013 Gezi protests, including philanthropist Osman Kavala, for exercising their right to freedom of expression and that more than a dozen reporters for Cumhuriyet newspaper have been convicted of terrorism in relation to their work as journalists.

In Azerbaijan, authorities employ a variety of charges, including drug possession, incitement of religious hatred, terrorism, and attempted coup d’état, to restrict the freedom of expression of those considered opponents or critics of the government, such as opposition members, religious figures, and journalists. The incarceration of individuals such as youth activist Fuad Ahmadli, religious activist Said Dadashbeyli, and journalist Afgan Mukhkarli raises concerns about authorities’ abuse of the judicial system to punish dissent. Although President Aliyev in March released over 50 people widely considered to be political prisoners, a greater number remain behind bars.

In Kazakhstan, authorities have used vaguely defined laws to target dissenting voices for prosecution. While we welcome the ultimate release of Serikzhan Bilash, who worked to support ethnic Kazakhs in Xinjiang, these vaguely defined laws led to the criminal charges filed against him.

In the Kyrgyz Republic, authorities have used laws against incitement of ethnic violence to stifle free speech, including during the arrest of peaceful protesters during the visit of Russian President Vladimir Putin.

Next year, Albania will chair the OSCE and represent the organization in advocating implementation of OSCE commitments. The United States supports Albania’s upcoming chairmanship, and we hope that Albania takes seriously the concerns of the Representative of Free Media and the country’s NGO community regarding proposed changes to the laws on online media in Albania.

Disinformation poses a real and present danger to the health of democracies. The disinformation we face today first came to the attention of many in 2014, when Russia employed it along with other types of asymmetric actions to help manipulate the public narrative to justify its aggressive acts in Crimea and eastern Ukraine. The Kremlin has engaged in a multi-layered assault on the democratic processes and institutions of many OSCE participating States, particularly Ukraine, the Baltic States and the United States. The U.S. Intelligence Community concluded that Russia directed an influence campaign aimed at the 2016 U.S. elections. Moscow’s campaign followed a strategy that blended covert intelligence operations with overt efforts by Russian Government agencies, state-funded media, third-party intermediaries, and paid social media users or “trolls.” And this continues today.

How should democracies respond to the disinformation challenge? States should ensure that their efforts to combat foreign disinformation and foreign state-sponsored propaganda are in line with international and domestic obligations on freedom of expression. The United States is committed to working within the OSCE and bilaterally with partners in government and civil society to increase media literacy programs that equip citizens with critical thinking skills to better evaluate sources, identify disinformation, and curb disinformation’s spread. We also support efforts to strengthen independent and diverse voices in the media to build resilience against disinformation and other forms of malign foreign influence.