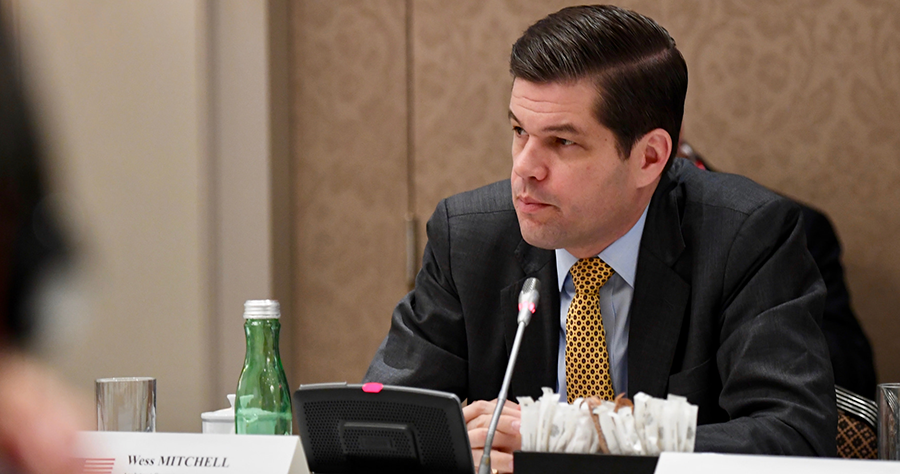 The State Department's Assistant Secretary for European and Eurasian Affairs, Dr. A. Wess Mitchell, speaks at an event on the impact of Russia's occupation of Crimea on Crimean Tatars, Vienna, Austria, December 7, 2017. (USOSCE/Michael Gower)

The State Department’s top official for European and Eurasian Affairs, Wess Mitchell, condemned Russia’s persecution of Crimean Tatars and voiced the United States’ unwavering support for Ukraine’s sovereignty and territorial integrity at a December 7 event hosted by Ukraine’s foreign minister, Pavlo Klimkin, ahead of the 2017 meeting of the OSCE Ministerial Council.

“I can’t think of any issue that better underscores the continued relevance of OSCE than the situation in Crimea,” said Assistant Secretary Mitchell. “The U.S. unequivocally condemns the persecution of Crimean Tatars.”

At the event, Assistant Secretary Mitchell and USOSCE Chargé d’Affaires Harry Kamian – along with foreign ministers and high-ranking officials from other OSCE countries – met Crimean Tatar leaders Akhtem Chiygoz and Ilmi Umerov, who described a campaign of repression and intimidation on the peninsula that includes kidnapping, searches of homes, and the dismantling of Crimean cultural and political institutions.

Chiygoz and Umerov are themselves victims of this campaign, both only recently freed from wrongful imprisonment for opposing Russia’s attempted annexation of Crimea.

Ukrainian Foreign Minister Klimkin held the event on the first morning of the OSCE’s most important annual event to bring renewed attention to the consequences of Russia’s ongoing occupation of Crimea. Other countries present at the event also expressed their intention to keep Crimea high on the agenda.

The United States further amplified its unwavering support for Ukraine later that morning at the OSCE Ministerial Council.

U.S. Secretary of State Rex Tillerson, leading the U.S. delegation at this year’s meeting, said at the opening plenary session that no challenge facing the OSCE is “more important or vexing than the situation in Ukraine.” The Secretary reiterated the United States’ commitment to Ukraine’s sovereignty, independence, and territorial integrity within its internationally recognized borders.

Calling for full implementation of the Minsk agreements, Secretary Tillerson also made clear that the United States will never accept Russia’s occupation and attempted annexation of Crimea, and that Crimea-related sanctions will remain in place until Russia returns full control of the peninsula to Ukraine.