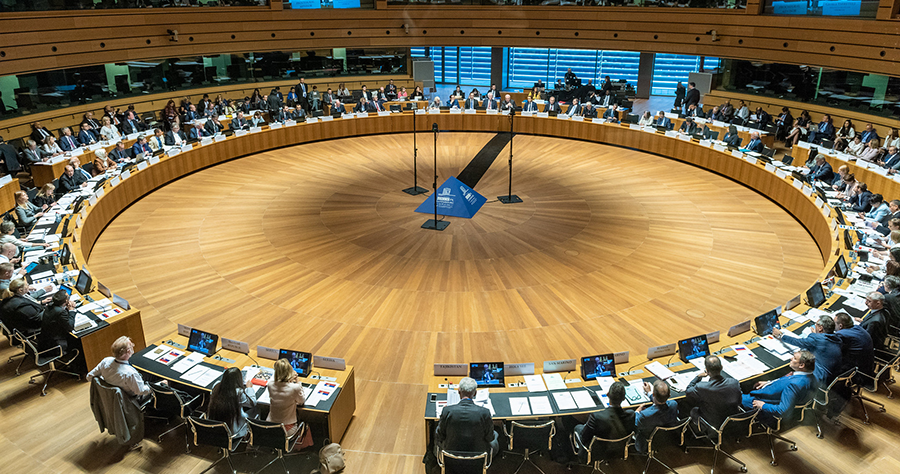 Ambassador James S. Gilmore, Permanent Representative to the U.S. Mission to the Organization for Security and Cooperation (OSCE), commended the adoption of an OSCE Parliamentary Assembly resolution condemning Russia’s militarization of the Azov Sea and Crimea. “The OSCE Parliamentarians did the right thing – Crimea is Ukraine,” Ambassador Gilmore said. The Ambassador also commended the OSCE Parliamentary Assembly’s record over the past five years of adopting resolutions censuring Russia’s violations of Helsinki Principles in its aggression against Ukraine and other neighboring states.

Other U.S. initiatives addressed Russian non-compliance as the root cause of the collapse of the Intermediate-Range Nuclear Forces (INF) treaty, and condemned the abuse of INTERPOL, particularly by Russia, to harass critics abroad. House Majority Leader Steny Hoyer (D-MD) participated as a key-note speaker.

U.S. Ambassador James S. Gilmore III made his first official trip as U.S. Permanent Representative to the U.S. Mission to the Organization for Security and Cooperation (OSCE) to attend the 28th Annual OSCE Parliamentary Assembly in Luxembourg. There, Ambassador Gilmore joined a full 17-member bipartisan and bicameral U.S. delegation headed by Helsinki Commission Co-Chair Senator Roger Wicker (R-MS). “The work of the OSCE Parliamentary Assembly is needed more than ever to meet today’s security challenges in Europe and Eurasia,” Ambassador Gilmore said, and affirmed the long-standing U.S. position that “we need a strong OSCE” to promote security across the OSCE region.

Ambassador Gilmore welcomed the active engagement of the U.S. delegation which resulted in the adoption of a resolution on the importance of civil society to the OSCE put forward by Representative and Helsinki Commission Chairman Alcee Hastings (D-FL), and a resolution of the importance of educating school children to avoid human trafficking put forward by Congressman Chris Smith (R-NJ). In addition, Representative Smith, who also serves as the OSCE Parliamentary Assembly Special Representative on Human Trafficking Issues, held an event on the same issue and Senator Ben Cardin (D-MD), who serves as OSCE Parliamentary Assembly Special Representative on Anti-Semitism, Racism and Intolerance, held an event on combating hate.

The United States shares the views expressed in previous years on Russia’s manufactured conflict in Ukraine and welcomes the passage by the OSCE Parliamentary Assembly of clear and powerful resolutions on that conflict. We join in condemning Russia’s illegal seizure and ongoing occupation of Crimea. Russia’s actions against Ukraine run counter to OSCE principles and commitments and violate international law. The United States fully supports Ukraine’s sovereignty, independence, and territorial integrity within its internationally recognized borders.

The 28th Annual Session of the OSCE Parliamentary Assembly met in Luxembourg July 4-8, 2019. The Annual Session was held under the theme “Advancing Sustainable Development to Promote Security: The Role of Parliaments.” It culminated in the adoption on July 8 of the Luxembourg Declaration. Representing the collective voice of the OSCE parliamentarians representing a billion people from Vancouver to Vladivostok, the Declaration helps shape OSCE and national policy.

U.S. Mission to the OSCE
Elaine A. Paplos, Counselor for Public Affairs