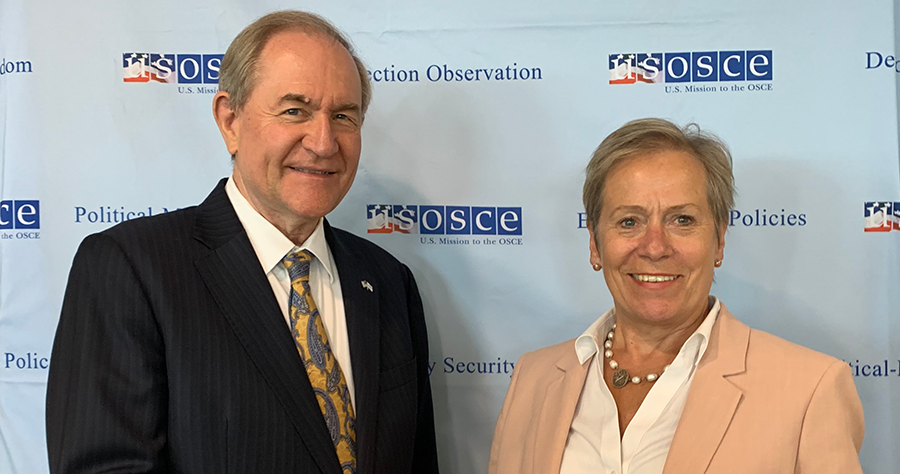 Respect for Human Rights and Democratic Principles of Governance is Essential to Lasting Prosperity and Peace among States, USOSCE Ambassador and ODIHR Director Agree

“Deepening the roots of democracy and building respect for fundamental human rights constitutes a top priority for this diplomatic mission,” U.S. Ambassador to the Organization for Security and Cooperation in Europe (OSCE) James S. Gilmore III told Office for Democratic Institutions and Human Rights (ODIHR) Director Ingibjörg Sólrún Gísladóttir September 10. The United States, long the largest contributor to the Warsaw-based independent OSCE institution, will continue to defend its autonomy, mandate, and budget, Gilmore pledged. A week before the commencement of the Human Dimension Implementation Meeting, the largest gathering of human rights officials in Europe, Gilmore and Gísladóttir discussed U.S. plans to deploy a robust official delegation to HDIM and sponsor side events on combatting anti-Semitism and human rights abuses in Chechnya and Crimea, among others.

ODIHR’s election observation missions and methodology remain the global gold standard, Gilmore asserted, assessing fairly OSCE participating States’ adherence to election-related commitments and providing useful roadmaps to improve performance. The United States will continue to back the institution with human and financial resources for election observation missions, the Ambassador insisted, and he encouraged other participating States to do the same. Ambassador Gilmore urged that all OSCE participating States partake actively in these missions to make them as valuable as possible in producing sound analysis, sharing lessons learned, and developing best practices.