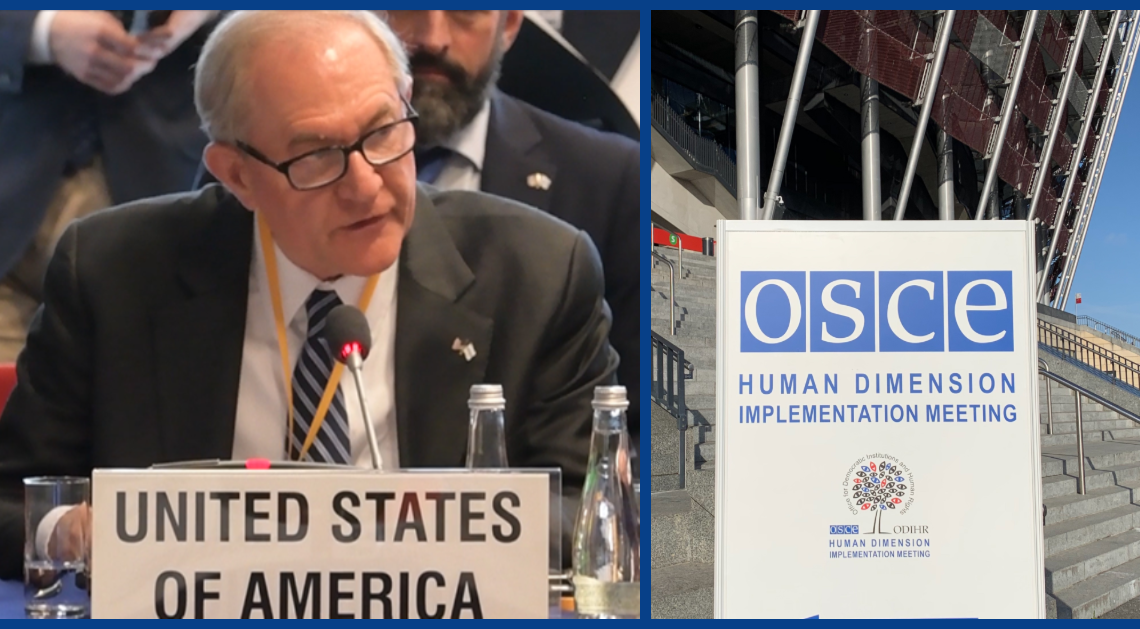 “States Must Do More to Protect Human Rights and Fundamental Freedoms,” says Ambassador Gilmore at the start of Europe’s Largest Human Rights Conference in Warsaw, Poland

At the start of the 2019 Human Dimension Implementation Meeting (HDIM) in Warsaw, Ambassador James S. Gilmore III urged Organization for Security and Cooperation in Europe (OSCE) participating States “to do more to protect human rights and fundamental freedoms.” Ambassador Gilmore called out Russia’s ongoing aggressive actions against Ukraine which have caused the worst security crisis in Europe since the 1990s – almost 13,000 people have been killed and two million driven from their homes in eastern Ukraine.

Ambassador Gilmore outlined five key U.S. priorities. First, upholding the rule of law and in particular, releasing political prisoners. In Russia-controlled areas of eastern Ukraine, those considered to have pro-Ukrainian sympathies are subject to imprisonment, torture, and extrajudicial killings. In December 2018, the OSCE’s Moscow Mechanism Expert report confirmed evidence of serious and systematic human rights violations and abuses occurred with impunity in Russia’s Republic of Chechnya. English: https://www.osce.org/odihr/407402?download=true Russian: https://www.osce.org/ru/odihr/410808?download=true “We continue to press for the release of all political prisoners,” Ambassador Gilmore emphasized.

Second, defending the role of independent civil society. The United States continues its longstanding practice of supporting independent civil society actors and human rights defenders as voices vital to building healthy societies. In too many OSCE states, there is a troubling trend of smearing and targeting for reprisal specific non-governmental organizations (NGOs), their members, and those who interact with them, when these organizations and individuals voice opposition to government.

Third, supporting freedom of religion. Freedom of religion is a foreign policy priority of the United States. The United States designates Turkmenistan and Tajikistan as Countries of Particular Concern for engaging in or tolerating particularly severe violations of religious freedom; in 2018 Russia was added to a Special Watch List. Authorities in Russia-occupied Crimea and Russia-controlled areas of eastern Ukraine repress religious congregations, including Jehovah’s Witnesses, Orthodox Church of Ukraine adherents, and Muslim Crimean Tatars. Russia has classified Jehovah’s Witnesses an “extremist organization” and imprisoned or put under house arrest 65 Witnesses.

Fourth, protecting media freedom and the safety of journalists: At the 2018 OSCE Ministerial Council Meeting in Milan in 2018, all 57 participating States committed to take effective action to improve the safety of journalists. For the text of this decision: https://www.osce.org/chairmanship/406538. In Milan, participating States recognized that female journalists face distinct risks given the hostility towards not only their work but also their gender.

Fifth, promoting tolerance in the face of anti-Semitism, discrimination, xenophobia, and hate crimes: “There is never any justification for anti-Semitism, anti-Muslim and anti-Christian discrimination, anti-Roma and other racial intolerance, or criminalizing LGBTI status or conduct,” Ambassador Gilmore emphasized.

The United States will use the 2019 HDIM to promote and defend human rights, fundamental freedoms, democratic institutions, and civil society across all 57 participating States.

Note: All working sessions will be livestreamed in English and Russian on ODIHR’s Facebook page and Website.