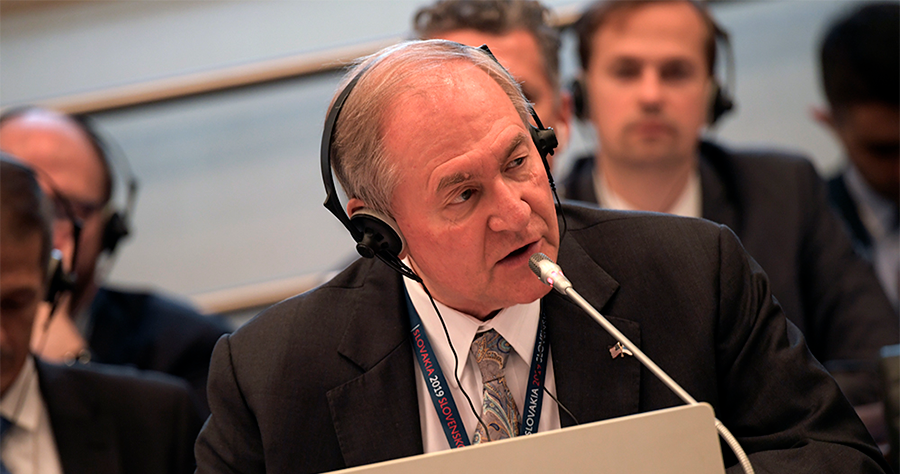 Vienna – Ambassador James Gilmore, in a statement at the OSCE’s weekly Permanent Council meeting, called on Russia to address human rights abuses both in the territories it occupies and within Russia itself.

“We are concerned about Russia’s repression, with impunity in cases of threats and violence against human rights defenders, journalists, environmental activists, political rivals, members of ethnic and religious minorities, and those who do not conform to so-called ‘traditional values,’” Ambassador Gilmore stated. He went on to say that the Republic of Chechnya remained a region of particular concern, and labeled the conduct of authorities there “evil.”

Building on statements made by Ambassador Gilmore, subsequent speakers from the U.S. delegation focused specifically on abuses in Russian-occupied Ukraine, pointing to a recent report on the topic by the UN Secretary General and urging all members of the Permanent Council to examine its conclusions. “Russian occupiers in Crimea engage in abuses with impunity, and the Russian Federation refuses to answer for these abuses,” the speaker concluded.

U.S. speakers also detailed cases of abuse in Crimea, as included in the UN report, including those suffered by the Crimean Tatars, an ethnic minority that has been targeted by the Russian occupiers. They noted the report’s findings that “at least 11 disappearances remain unsolved, with one activist found dead; there have been 186 raids on Crimean Tatar homes, schools, mosques, and businesses. Security services reportedly use beatings, electric shock, mock executions, and sexual violence to obtain false confessions.”

In a week where hand grenades and landmines injured several Ukrainian civilians, including children, in areas of Ukraine not under control of the Ukrainian government, the U.S. speakers emphasized that “the United States will stand with the people of Ukraine as they build a strong and successful democracy – one that sees all of its territory, including Crimea, fully restored.”