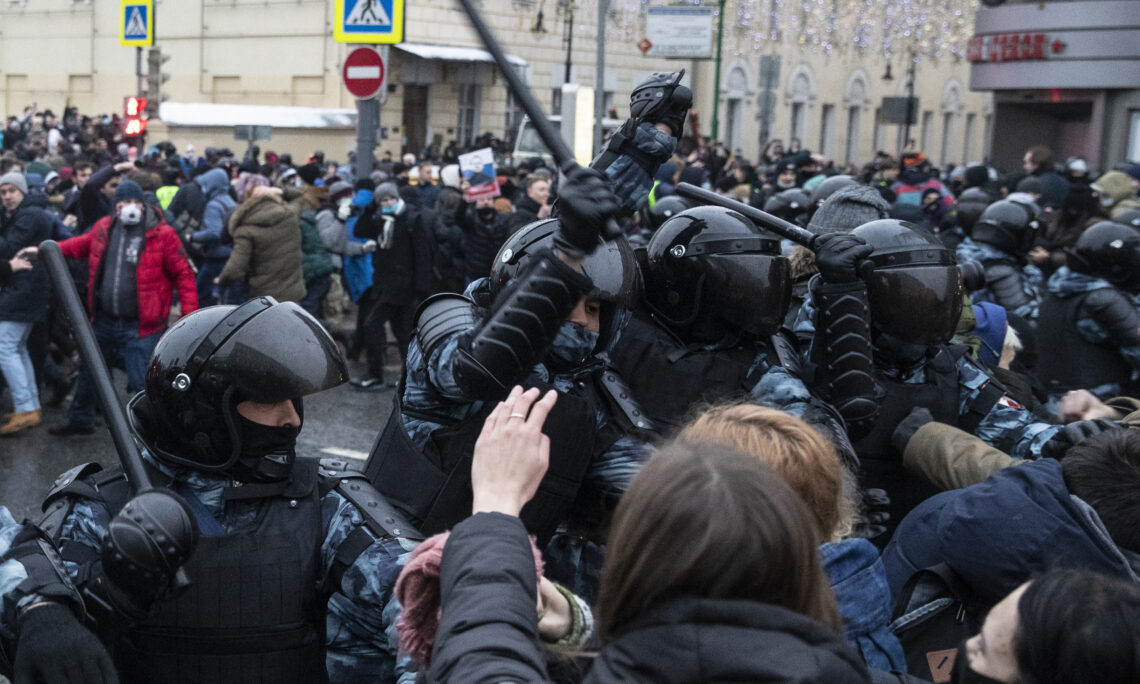 Police officers clash with people during a protest against the jailing of opposition leader Alexei Navalny. (AP Photo/Pavel Golovkin)

Violations of the Right to Peaceful Assembly in the Russian Federation

The United States recognizes the right of all persons to peaceful assembly and strongly condemns the use of harsh tactics against protesters and journalists this past weekend in cities throughout Russia.  A respected monitoring NGO reported over 3,800 detentions related to the January 23 protests—setting a dubious new record for modern Russia.  What is equally troubling is that prior to this weekend’s events, the Russian government sought to suppress the exercise of the right to peaceful assembly and freedom of expression by harassing protest organizers, threatening social media platforms, and pre-emptively detaining potential participants.  This follows an obvious pattern of tighter restrictions on and repressive actions against civil society, independent media, and political opposition.

The right to peaceful assembly is inscribed in Russia’s constitution.  It is enshrined in the Universal Declaration of Human Rights and OSCE commitments Russia freely accepted.  Moreover, Russia has an obligation to respect peaceful assembly as a signatory to the International Covenant on Civil and Political Rights.

The arrest of opposition figure Aleksey Navalny and the crackdown on protests that followed are troubling indications of the Russian government’s efforts to impose further restrictions on civil society and the exercise of human rights and fundamental freedoms, in contempt of Russia’s obligations and commitments.

We join a chorus of concerned members of the international community and call on Russian authorities to release all those detained for exercising their human rights and for the immediate and unconditional release of Aleksey Navalny.  We urge Russia to fully cooperate with the international community’s investigation into the poisoning of one of its own citizens and credibly explain the use of a chemical weapon on its soil.

The United States will continue to work cooperatively with like-minded countries around the world to defend human rights, in Russia and wherever else they come under threat.