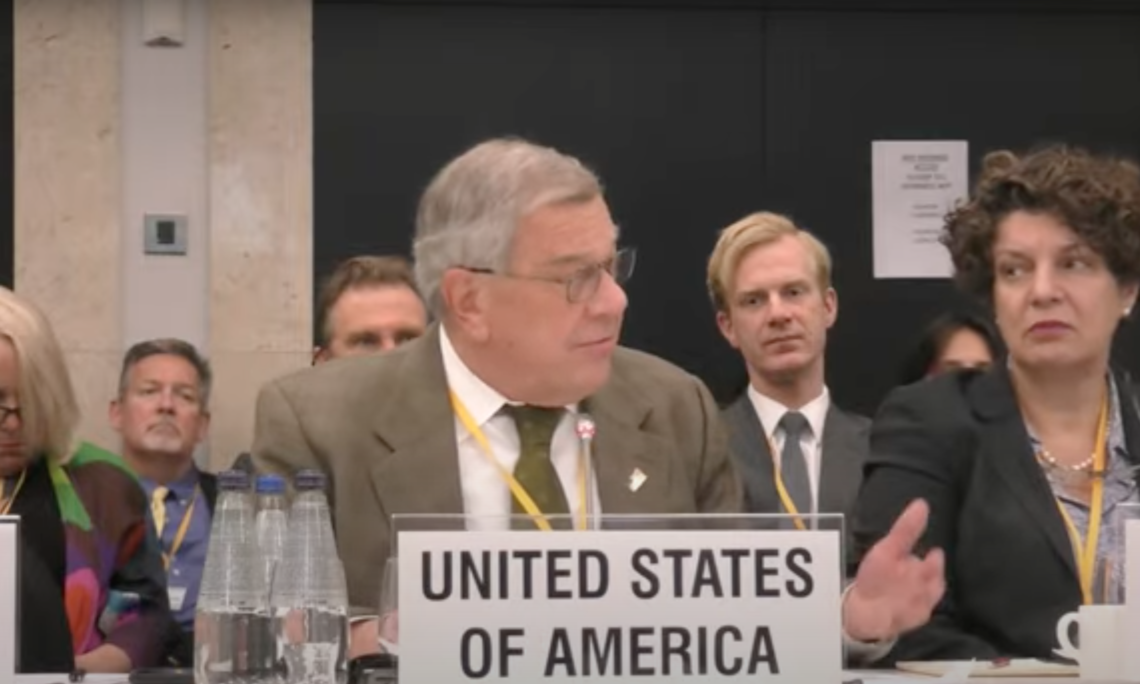 Ambassador Michael G. Kozak, Head of the U.S. Delegation at the WarsawHDC

As prepared for delivery by Ambassador Michael G. Kozak
Head of the U.S. Delegation,
Warsaw
October 7, 2022

On behalf of the Delegation of the United States, and our esteemed Ambassador to the OSCE Michael Carpenter, I wish to express sincere appreciation to the Polish Chairmanship for its principled and farsighted leadership in convening this conference and to ODIHR for organizing it.

The Warsaw Human Dimension Conference has been a resounding success. Together, all who have participated — governments and civil society representatives alike — have resolutely carried forward the decades-long OSCE tradition of holding participating States accountable for meeting their human dimension commitments, my own country included.

Together, we sent a strong message to Russia and to any other participating States that would undermine OSCE’s human dimension work: You did not succeed. You failed to escape scrutiny for your abuses. You cannot obstruct OSCE’s work by blocking the Human Dimension Implementation Meeting. You will be held responsible for your actions.

What we have done together in Warsaw is a vital contribution to achieving a larger goal: defending the security of the OSCE region. Security among states is inseparable from respect for the dignity and rights of the people who live within those states. The Helsinki Final Act enshrined this truth, and all of us are living witnesses to it. In every session of this conference, we have heard deeply moving, eyewitness accounts that underscore this unbreakable link.

States that violate the human rights of their own people tend to have contempt for the sovereignty and territorial integrity of other countries. Autocrats who abuse their power at home undermine the independence of other states. Countries in which state power is unchecked endanger our common security. Countries that suppress their own people in the end are weak and will not be successful.

There is no more chilling example than Putin and his war of aggression against Ukraine. Unbridled power and the purging of dissenting voices have grave consequences – not just for Ukraine and other neighboring states, but for Russia itself. The most recent Moscow Mechanism report made clear: (quote) “repression on the inside and war on the outside are connected.” The repressive Putin regime and its imperialist delusions constitute a double-headed threat to our common security.

My government stands united with Ukraine. As President Biden has said, winning the war in Ukraine is to get Russia out of Ukraine completely. That is the most effective means of fortifying the security of this region and the human rights of those who call it home. Ukraine’s extraordinary unity and bravery — in contrast to Russia’s barbaric abuses and demoralizing setbacks on the battlefield — demonstrate that democracy makes a country stronger. Authoritarianism harms its own citizens and dooms its undertakings to ultimate failure. As our Lithuanian colleague said this morning, we look forward to the day these kinds of abuses end and an open, democratic Russia, secure within its internationally recognized borders, will take its place among us as a trusted partner.

Together at this conference, we have systematically spotlighted human rights and democracy concerns across the region — most understandably and acutely the appalling atrocities committed by Russia’s invading forces in Ukraine. We have also paid careful attention to the disturbing trends within Russia itself and occurring elsewhere in the region: intense pressure on civil society and independent media; democratic backsliding and undermining of the rule of law; a growing number of political prisoners – we call for their immediate, unconditional release; transnational repression; systemic torture and enforced disappearances; racism, antisemitism, and other forms of intolerance.

Recent incidents of violence within and between states give rise to allegations of abuse that must be fully and transparently investigated.

During the time we have met in Warsaw, the Putin regime and its puppets — after holding sham referenda — declared the purported annexation of parts of Ukraine’s sovereign territory. But the Kremlin seems confused about which parts since Ukraine’s forces are liberating areas previously controlled by Russia’s retreating forces. Liberate your own people within Russia’s internationally recognized borders instead of pretending to annex parts of Ukraine. You will never make Ukraine part of Russia. Evidently the Kremlin is opening a new case charging Vladimir Kara-Murza with treason.

Mr. Chairman, we salute the bravery of the many activists who came here to speak out despite the risk to themselves and their loved ones. Your firsthand testimonies greatly enriched our discussions.

Credible information has come to us of threats against NGO participants and their families for participating in this conference. Tajik authorities have moved imprisoned family members to solitary confinement, and this week Tajik journalist Abdullo Ghurbati was reportedly sentenced to seven and a half years on false extremism charges. When governments partner with civil society activists instead of taking reprisal against them, countries can better meet the challenges of today’s world.

In conclusion, the United States delegation wishes to thank the government and people of Poland for their gracious hospitality. We look forward to the Ministerial meeting in December as the capstone of Poland’s successful and productive year as Chair-in-Office. We also look forward to the upcoming Chairmanship of North Macedonia, and to working with fellow participating States to continue the tradition of comprehensive implementation reviews with vibrant civil society participation. Together, we all have much work left to do — for the sake of the people of our region and for the sake of our common security.