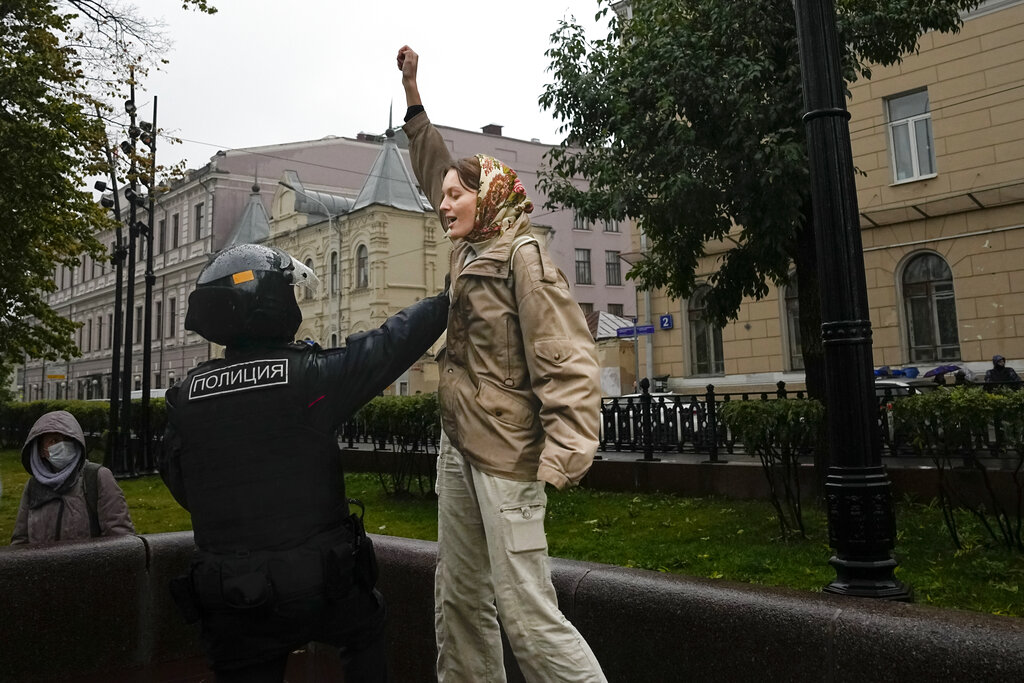 A police officer detains a demonstrator during a protest against a partial mobilization in Moscow, Russia. (AP Photo/File)

As prepared for delivery by Ambassador Michael G. Kozak, Head of Delegation,

Let me express my delegation’s thanks to the Polish Chair for his principled leadership in hosting this conference.  President Biden has placed the promotion of democracy and human rights at the center of U.S. foreign policy.  The OSCE is a key forum for advancing these efforts.

Our collective presence here today sends a clear message to Russia and to any other participating State that would undermine the OSCE’s human dimension work:  You cannot escape international scrutiny by obstructing the Human Dimension Implementation Meeting or other core OSCE functions.

It has been three years since we last met in Warsaw.  Over the next few weeks, we need to discuss the growing host of human dimension issues across the OSCE region, and my delegation looks forward to doing so.  Let me begin by addressing the “elephant in the room” – actually the bear, which is all the more conspicuous by being, for all intents and purposes, absent.

As we meet, Russia wages brutal war against Ukraine while Poland and other nearby countries represented at this table face a massive refugee crisis.  Two OSCE Moscow Mechanism Experts Mission reports chronicled the death and destruction Russia’s bombardments have wreaked on hospitals, apartment buildings, schools, places of worship, cultural heritage sites, and a train station full of civilians.  The Second Expert report in particular reported mass graves and evidence of torture, rape, and executions committed in areas that had been held by Russia’s forces.  Both Expert Missions found clear patterns of serious violations of international humanitarian law.  As Ukraine retakes its territory, more evidence of Russian atrocities come to light, as we have just seen in Izyum.  Information also increasingly reaches us about Russia’s appalling filtration operations.  Eyewitnesses tell of families separated, interrogations, beatings, disappearances, extrajudicial killings, and forced deportations to Russia, including of children.

The OSCE Moscow Mechanism report issued just last week makes clear the Kremlin’s war against Ukraine is linked to its crackdown at home.  Russia’s “repression on the inside and war on the outside are connected to each other as if in a communicating tube.”  The report records that over the past decade the Kremlin has inexorably restricted civil society through draconian “foreign agent” laws; restricted freedom of the media and freedom of expression to cut the people of Russia off from independent sources of information; curtailed the right of peaceful assembly; and fostered a climate of fear and intimidation among civil society groups, human rights activists, independent journalists and bloggers, and anyone who would dare to question or criticize the policies of Putin and his government.

This systematic domestic repression prepared the ground for Russia’s aggression against Ukraine, and it has only intensified within Russia since Putin’s plans for a quick victory were thwarted and Ukraine’s forces have begun to take back territory.  Meanwhile, President Putin feeds his own citizens lies about the horrors he is inflicting in their name on the people of Ukraine.  He tries to hide his military setbacks and undercounts the deaths of thousands and thousands of Russia’s soldiers while he launches a  “partial mobilization” to replace them with new cannon fodder and cracks down on those across Russia protesting the mobilization.

The Lukashenka regime in Belarus relied on Russia as it faced massive protests over stealing the 2020 election.  It thus made itself powerless to resist Putin’s demands for the regime’s complicity in his war against Belarus’ neighbor, Ukraine.  The United States and our Allies and partners, however, will stand with Ukraine as it defends its democracy, its sovereignty, and its territorial integrity.  We strongly support efforts by the OSCE, the UN, the ICC, and other international organizations assisting Ukraine in documenting, investigating, and prosecuting atrocities.  Russia will be held to account.

Events related to Russia’s aggression against Ukraine compel our appalled attention.  At the same time, many other matters of importance to the human dimension of security in this region also require discussion.

The pandemic affected every aspect of life in our region.  The issues of concern we discussed at the 2019 Human Dimension Implementation Meeting did not disappear while we were all coping with COVID-19.  The pandemic compounded many of our concerns, not least because a number of authoritarian governments in this region exploited the health crisis to intensify their repression. The health threat has eased, but our human dimension concerns have not, in particular:  the constricting space for civil society; shrinking media pluralism; unfree and unfair elections; undemocratic changes to constitutions, laws, and regulations to concentrate and perpetuate a grip on power; a weakening of judicial independence; anti-extremism or anti-terrorism laws used as political weapons against peaceful members of minority groups, and attempts to intimidate and silence critics through acts of transnational repression.

Antisemitism and other forms of intolerance continue to increase.  Irresponsible public figures cynically distort history and fan hatred against racial, ethnic, religious, indigenous, and LGBTQI+ communities.  The number of individuals unjustly incarcerated for exercising their human rights is growing.  Violence has broken out along the Tajikistan-Kyrgyzstan border and human rights abuses and violations of international humanitarian law in connection with the Nagorno-Karabakh conflict remain to be investigated.  Despite the 2020 Tirana Ministerial Council Decision on eradicating torture, it remains a systemic problem in nine participating States, as well as in parts of countries Russia holds or occupies, including under its proxies’ control.

The concerns I just mentioned would make for a full agenda for this conference in any other year, even without Russia’s war raging next door.

All participating States, including the United States, must be held accountable for meeting our human dimension commitments.  How best to correct the shortcomings in our democracy is for the American people to debate, for our free press to report, and for the international community to comment upon.  We are not alone among the participating States in having societal disparities and political divisions that must be grappled with.  And we all know that malign actors – both foreign and domestic — seek to exploit these problems to their own advantage.  We strive to confront and fix our defects in the open.  In the United States we know we cannot solve our problems by cracking down on criticism or conjuring fears of foreign enemies to hide our flaws and deflect responsibility for them.

The United States convened the first Summit for Democracy in December 2021.  We’ve spent 2022 — a Year of Action — encouraging democratic resilience globally, and also working to make progress on our own pledges to bolster democracy and justice at home.  So, my delegation has come to Warsaw prepared for an honest discussion of our own record and that of others.  I will now offer some overarching observations to frame our discussions in the working sessions:    States that violate the human rights of their own people have contempt for the sovereignty and territorial integrity of other countries.  Autocrats who abuse their power at home spread disinformation to sow division in other countries and undermine their elections.  Regimes that choke off domestic dissent reach across borders to silence critics located abroad in blatant acts of transnational repression – Russia by poisoning defectors with chemical weapons, and Belarus by diverting an international flight to seize a journalist, to cite only two notorious cases among many perpetrated by authoritarian states in the OSCE region.  Dictators don’t care much about public safety or upholding a rules-based international order.

The truth embedded in the founding Helsinki principles has never been more evident:  Respect for human rights within states is essential to security among states.

In closing, let me express deep respect for the human rights defenders who have journeyed here from across the region.  Many of you risk reprisal, not just against yourselves but also your families.  Some of you already have suffered for your vital work.  My delegation looks forward to hearing from you about how we can best advance Human Dimension priorities together.  At a time when the double-headed threat of repression and aggression imperils the human rights of people and the security of states, it will be critical that we work together.