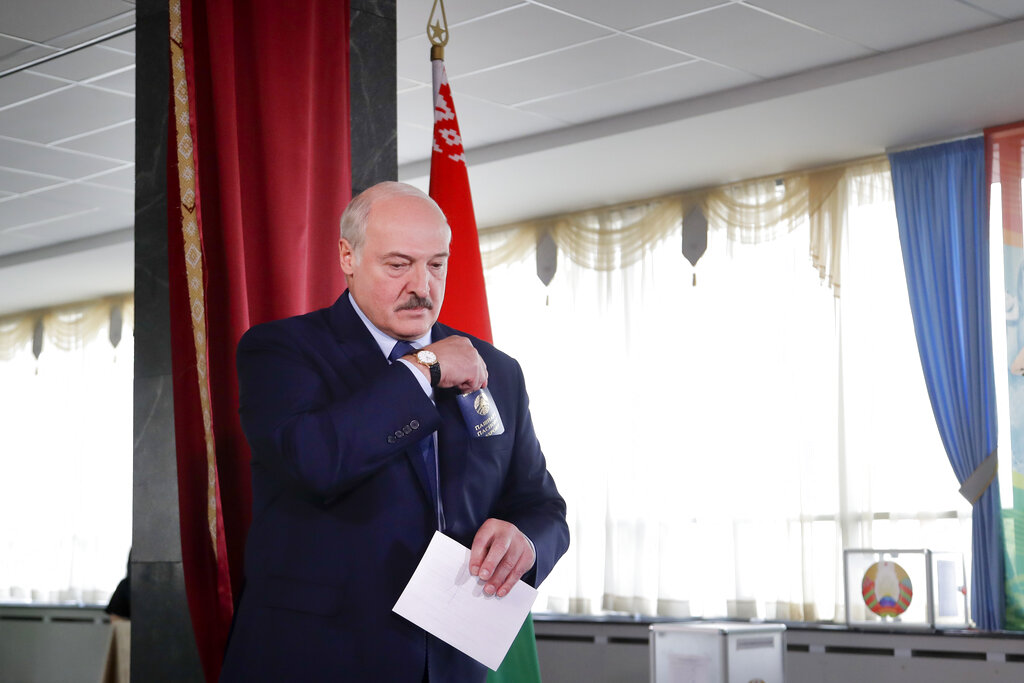 In Belarus, there have been no free and fair elections since Alyaksandr Lukashenka’s 1994 election. Brutal repressions following the fraudulent 2020 presidential election relentlessly continue. (AP Photo/Sergei Grits)

As prepared for delivery by Ambassador Michael Carpenter,
U.S Permanent Representative of the OSCE
Warsaw
September 27, 2022

The Charter of Paris begins with the words “A new era of Democracy, Peace and Unity.” This is what the OSCE stood for just after the fall of Communism – which, incidentally, was initiated right here in Poland with the Solidarity movement – and these values are still our best hope for the future. Despite what the propagandists of authoritarianism try to say, democracies are the ones that maximize freedom, security, and prosperity. They are able to course-correct and empower citizens to make meaningful choices about the future of their countries. And, for the most part, liberal democracies remain at peace with one another.

By contrast, autocracies not only curtail fundamental freedoms at home, but they frequently project their repressive apparatus outside of their own borders. Russia’s war of aggression against Ukraine and its appalling treatment of those living in the southern and eastern regions of Ukraine – where rape, torture, and mistreatment are commonplace – is a prime example of this.

Before the outbreak of the war, in what seems like a different epoch, the United States convened the first ever Summit for Democracy in December 2021 to call attention to the challenges and opportunities facing democracies and to launch a Year of Action to set forth an affirmative agenda for democratic renewal and to tackle the greatest threats faced by democracies today through collective action. Even as we have been focused on supporting Ukraine in its titanic struggle to defend its own democracy, we have also dedicated resources to encouraging democratic resilience globally, while making progress on our domestic commitments to bolster democracy at home.

We thank ODIHR and the OSCE Parliamentary Assembly for advancing these same commitments.

We remain concerned about the records of some participating States in implementing their commitments to free and fair elections, equal participation in public life, and respect for civil and political rights. We call on these States to engage with ODIHR to address these concerns.

In Belarus, there have been no free and fair elections since Alyaksandr Lukashenka’s 1994 election. Brutal repressions following the fraudulent 2020 presidential election relentlessly continue. In February 2022, the regime engineered changes to the constitution broadening the power of the unelected delegates to the All-Belarusian People’s Assembly and enabling Lukashenka to stay in office until 2035.

The Russian government has waged an all-out war on Ukraine, but it also tries to destabilize other democracies through its malign influence, while legislating attacks on civil society, human rights, and democracy at home. To ensure victory for Vladimir Putin and his United Russia party, the Kremlin bars opposition candidates, controls media, and effectively criminalizes the expression of alternative viewpoints. We do not forget that Russia interfered in the 2016 U.S. elections and that the Kremlin has continued its active measures against us and other participating States, spreading disinformation to sow division and doubts about democratic processes and institutions.

Turkmenistan’s March presidential elections resulted in a dynastic transfer of power. We share ODIHR’s needs assessment observations that while electoral code was amended prior to the March elections, all previous ODIHR recommendations remained unaddressed, including those related to the separation of powers and pluralistic environment, the exercise of fundamental human rights, freedom of the media, election administration, voter and candidate registration, campaigning, and election day procedures. Thus the elections were not free, fair, or competitive. We agree with OSCE’s assessment that Uzbekistan’s October 2021 presidential elections were “peaceful and orderly” although they were undermined by “restrictions on fundamental freedoms”, “the right to stand” for election, and “significant procedural irregularities.” But in a positive development, new legislation in Uzbekistan relating to reforms has been submitted to ODIHR for review. We also agree with the OSCE’s Election Observation Mission’s assessment that Kazakhstan’s January 2021 parliamentary elections “lacked genuine competition.” We note the 2021 constitution intended to move the country away from a super-presidential system and towards a stronger parliament with more checks and balances on power. However, the June constitutional referendum was held without time for meaningful public review and debate. Taking action on an ODIHR recommendation, however, Kazakhstan is moving to allow ODIHR trial monitoring, a positive step. We are concerned Kyrgyzstan’s new 2021 constitution will move the country toward authoritarian rule by reducing parliament’s role and concentrating power in the president.

According to ODIHR’s final election observation report, Hungary’s parliamentary election and referendum this year were well run but marred by the absence of a level playing field due to the pervasive overlap between the ruling coalition and the government, as well as by biased news coverage. Serbia’s April presidential and parliamentary elections were “smoothly conducted and peaceful” however, they had shortcomings, including unbalanced access to media, pressure on public sector employees, and misuse of administrative resources in favor of incumbents. Bosnia and Herzegovina has yet to amend its electoral system to align with rulings from the European Court of Human Rights to ensure full equality and representation of all citizens. We call on Bosnia and Herzegovina to select its state ombudsmen in a transparent manner in consultation with civil society.

We are troubled by the serious continued democratic backsliding in Georgia and unacceptable pressure on NGOs and the media. We urge the authorities to work inclusively and transparently with all stakeholders including civil society and opposition parties, to address the EU’s conditions for candidacy status.

We are concerned by efforts by the ruling party in Turkiye to limit the freedom of opposition parties, politicians, and journalists. We encourage the government of Turkiye to continue its collaboration with the OSCE observers and issue timely invitations for general elections scheduled to occur by June 2023. Conditions for Azerbaijan’s political opposition and civil society have not improved since the February 2020 parliamentary elections. Many citizens are still denied the opportunity to openly discuss public policy issues and make free choices.

Democracy at the sub-national level of participating States is also important, and regions should be able to exercise autonomy and self-governance where guaranteed by law. Following Tajikistan’s violent crackdown on the Gorno-Badakhshan Autonomous Region, credible reports emerged of targeted killings, house-to-house searches, arrests, torture, and harassment and arrest of journalists. A proposed change to Uzbekistan’s constitution, which would have undermined the status of the Autonomous Republic of Karakalpakstan, resulted in protests this July. While information has been limited, there are reports that police killed at least 19 people and wounded hundreds.

As U.S. midterm elections approach, we acknowledge that our own democracy faces challenges. We are always seeking a more perfect union and our democracy empowers us to make changes and improve upon what has come before in our hope for the future. Even when we disagree, the debate that ensues is underpinned by the freedoms that democracies hold dear. Robust discussion and debate in the U.S. media, within Congress, and among state and local government officials will guide the path forward. We recognize that improvements can always be made, and we take OSCE’s reports about our elections seriously. We look forward to welcoming OSCE election observers this fall; the ODIHR core team is already on the ground.