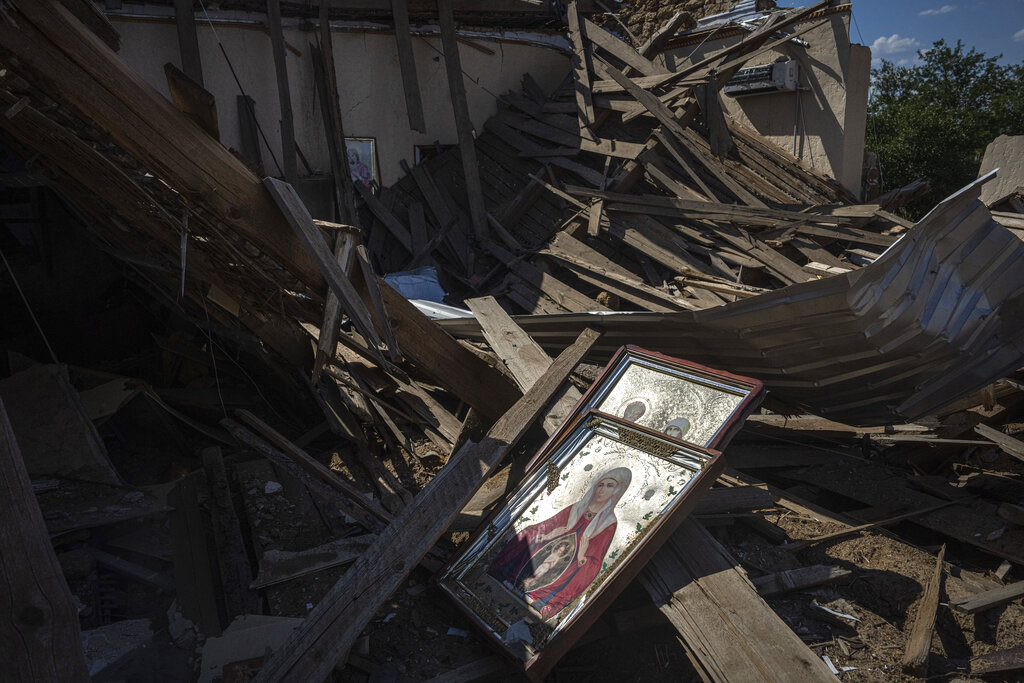 Icons lay on the debris of a church which was destroyed after Russian attack at the frontline in Mykolaiv region, Ukraine, on Monday. (AP Photo/Evgeniy Maloletka)

Freedom of religion or belief; Freedom of assembly and association; Human Rights Defenders; Freedom of Movement

As prepared for delivery by Ambassador Michael G. Kozak,

Since the 2019 HDIM, conditions for the exercise of religious freedom and of peaceful assembly and association have remained unduly restrictive or have dramatically deteriorated in a number of participating States, and Human Rights Defenders remain under intense pressure.

In recent months we have seen Russia target religious groups in parts of other countries that it controls or occupies, including Crimean Tatar Muslims and Orthodox Christians in Ukraine.  Russia also designates peaceful religious groups as “extremist,” “terrorist,” or “undesirable” to justify abuses against their members.  Russia’s actions against members of Falon Gong, Jehovah’s Witnesses, Scientologists, other minority Christians, readers of the theologian Said Nursi, and other religious groups include raids, arrests, excessive prison sentences, and allegedly torture.  Russia’s manipulation and distortion of the history of the Holocaust and the Second World War is not only shamefully antisemitic, it distracts from the crucial work of countering real threats posed by racial or ethnic violent extremists in the OSCE region.

In Belarus, Lukashenka’s relentless repression has not spared religious communities.  Belarusian Orthodox Church Archbishop Artsemi of Hrodna was removed for his criticism of the regime.  The government also restricts clergy from visiting prisons and confiscates jewelry with religious symbols from prisoners.

Azerbaijan authorities tightly regulate religious observance, even of faiths recognized by the government.  Religious organizations are required to register with the government in order to hold meetings, rent property, maintain a bank account, and act as legal entities.  Azerbaijan’s parliament amended its “Law on Freedom of Religious Beliefs” to expand the state’s already extensive control over religious organizations.  The law bans activities by unregistered religious groups; of almost a thousand registered religious communities in 2021, fewer than 40 were from minority faiths.

Tajikistan continues to restrict participation of women and minors in religious services, reject attempts by minority religious organizations to register, and limits the publication or importation of religious literature.  While we welcome Turkmenistan‘s release of 16 Jehovah’s Witnesses who had been imprisoned as conscientious objectors, the government continues to harass followers of some unregistered Christian organizations.

Proposed or enacted laws in some participating States banning religious attire, ritual animal slaughter, and circumcision threaten the viability of Muslim and Jewish communities by restricting their ability to observe their faith, and thus interferes with their ability to exercise their right to freedom of religion or belief.

The assault on freedom of assembly and association is likewise widespread.  In Russia, organizations and individuals the Kremlin designates as “undesirable,” “extremist,” and/or “foreign agents” are subject to restrictions on their work and may face criminal prosecution.  In July, the Duma passed new legislation expanding the definition of foreign agents to anyone under “foreign influence” — an even lower and vaguer bar than the previous one of receiving material or financial assistance from abroad.  In December 2021, in advance of Russia’s full-scale invasion of Ukraine, authorities closed the respected NGO Memorial International, which documented Stalinist crimes and the growing number of present-day political prisoners.  The Kremlin is afraid to allow the people of Russia to know the truth about both the past and the present.

In Belarus, the regime continues its crackdown on the pro-democracy movement.  Since August 2020, authorities banned or forced the closure of more than 765 NGOs.  All independent media has been exiled, detained, and/or banned.  All independent labor unions — also banned.  Peaceful protesters cannot assemble without fear of arrest and/or violent dispersion.  The regime currently holds over 1,300 political prisoners, and the number keeps growing.

Turkey’s police repeatedly and sometimes violently suppress peaceful assemblies, detaining participants in the International Women’s Day march and record numbers during LGBTQI+ Pride Month marches.  Human rights defenders continue to face repression, including judicial harassment of civil society, media, and political leaders through prolonged pretrial detention, overly broad claims of support for terrorism, and politically motivated prosecutions as in the case of Osman Kavala.  We continue to urge the government to fulfil its obligations to the European Court of Human Rights by releasing Osman Kavala and Selahattin Demirtas.  A law reportedly aimed at countering terrorist financing has been disproportionately applied to harass NGOs working on human rights topics.

In January 2022, peaceful protests in Kazakhstan turned violent, with more than 200 people killed and thousands arrested.  Violent protests and looting are not acceptable.  However, there are credible reports that authorities arrested and even killed some peaceful protesters.  The deputy prosecutor general confirmed six cases of persons tortured to death in custody.  Those responsible must be held accountable, victims given redress, and those tasked with investigating abuse must provide the public full information about what happened.  We encourage continued government cooperation with local civil society partners to address human rights shortcomings, corruption, and political repression.

The situation in Turkmenistan remains so restricted that for all intents and purposes, no independent civil society exists in the country.

Several participating States in Central Asia have implemented onerous new financial and programmatic reporting requirements for NGOs that can be used against organizations critical of the government.  In Kazakhstan prior to the January 2021 elections, the government used new financial and reporting legislation to threaten several NGOs with fines and closure.  In Kyrgyzstan, an NGO law adopted in 2021 imposed burdensome new financial reporting requirements.  In 2019, Tajikistan adopted similar legislation and the number of registration- and tax-inspections of NGOs has increased.