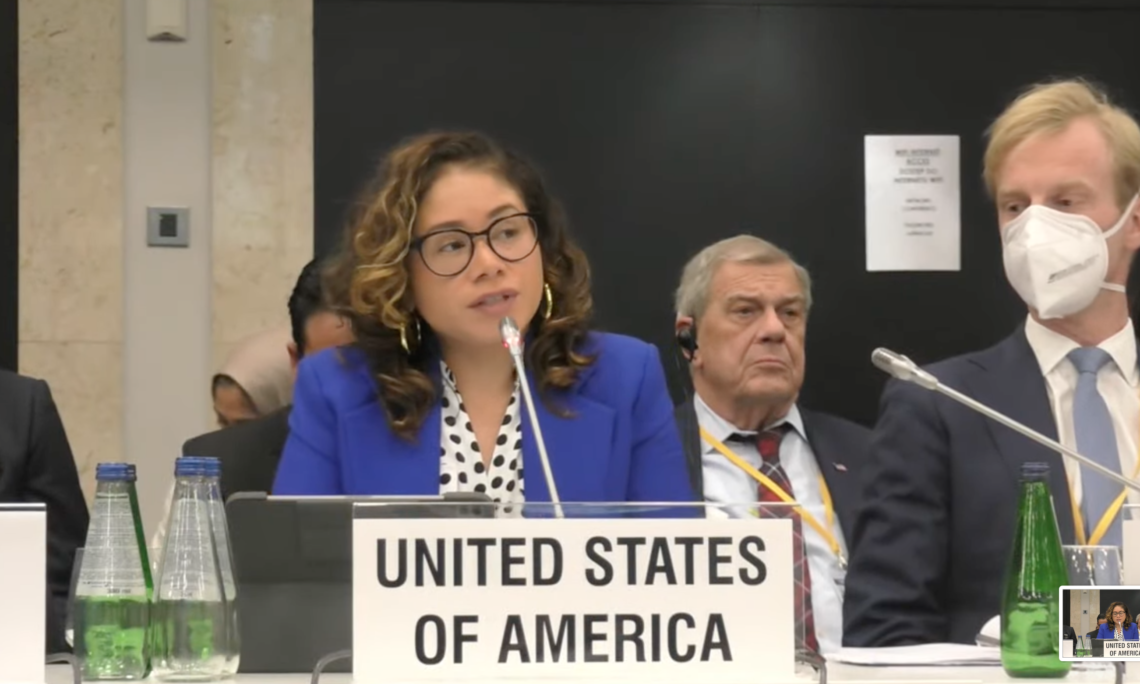 Combatting Racism, xenophobia, discrimination and intolerance including based on religion or belief

As prepared for delivery by Desiree Cormier Smith

I am Desirée Cormier Smith and I serve as the U.S. State Department’s first Special Representative for Racial Equity and Justice.  It’s my duty to ensure that U.S. foreign policy advances the human rights of persons belonging to marginalized racial and ethnic groups, including Indigenous groups.  My mandate focuses on combating systemic racism, xenophobia, and discrimination around the world.  The United States’ rich diversity is a source of national strength and pride.  However, we do not ignore the reality that our country – like many in the OSCE region and across the globe – continues to grapple with racism, xenophobia, and discrimination.  In the United States, this means acknowledging the tragic and ugly parts of our history, including the displacement of Native Americans and the enslavement of Africans.  As President Biden said, “Great nations do not shirk from their past.  They come to terms with the mistakes they made in order to heal and do better.”  That is why, on his first day in office, President Biden signed an historic Executive Order on Advancing Racial Equity and Support for Underserved Communities.

All countries have a responsibility to do more in support of marginalized communities.  To be credible champions for marginalized people around the world, we must lead by example and start by supporting and uplifting the most marginalized within our own societies.  Together, we must strive to create an OSCE region and a world where all are included, treated justly, and able to realize their potential.  It’s the right thing to do, and it’s also in our shared security interest.  Malign actors seek to exploit those who are discriminated against and unable to improve their circumstances by meaningfully participating in their society.  History also shows that in local and regional conflicts, marginalized communities are subject to compounding and disproportionate harm.  Societies that successfully address deep-rooted disparities tend to be more resilient, stable, and prosperous; instead of posing risks to international security, they contribute to it – and that’s good for us all.

Racism, xenophobia, antisemitism, and other forms of intolerance and discrimination can manifest in different ways in each country, so combatting them obviously requires tailoring responses to particular circumstances.  But the interconnectedness of hatreds is also clear.  Hate knows no boundaries – neither moral, nor political, nor territorial.  And those who hate are increasingly interconnected, including through their use of new technologies of unprecedented speed and reach.  My colleague, the U.S. Special Envoy to Monitor and Combat Antisemitism, Ambassador Deborah Lipstadt, often underscores the interconnectedness of racism, antisemitism, and other forms of hate.  This year in Buffalo, New York, a shooter killed 10 innocent Black people while they were simply shopping for groceries and taking their children for ice cream.  His Internet postings made it clear that Black people were not his only target.  Jews, he wrote, had to be “removed from our Western civilization in any way possible.”  His immediate goal was to kill Black people, but that “the Jews would be dealt with in time.”  In the OSCE region, conspiracy theories have taken hold, many of which specifically target and demonize vulnerable minority communities, including people of Asian descent, people of African descent, Roma, Muslims, and Jews.  We see chilling interconnections, whether direct or inspirational, between domestic and international racially or ethnically motivated violent extremists, particularly violent white supremacists.

It is vital that governments and civil society partner to identify and address the many manifestations of hatred and take a unified stance against them.  The International Holocaust Remembrance Alliance’s Working Definitions of Antisemitism and of Anti-Roma Discrimination are important tools in combating intolerance and we urge all who have not yet done so to fully embrace and apply them.

It is appalling that in many participating States, including in my own country, we have seen political leaders and other public figures stoke racism, xenophobia, homophobia, sexism, and antisemitism for their own ends.  Russia’s President Putin has tried to justify his war against Ukraine by claiming he is “de-nazifying” a democratic country that elected a Jewish president.  The Kremlin’s manipulation and distortion of the history of the Holocaust and the Second World War is not only shameful, it distracts from the crucial work of countering real threats posed by racial or ethnic violent extremists in the OSCE region.

The recent statement by Hungary’s Prime Minister Viktor Orban that Europeans should not “become peoples of mixed race” is another horrendous example.  We condemn his hateful rhetoric.  Despite rulings by the International Criminal Tribunal, Serb member of the BiH Presidency Milorad Dodik and some of his followers deny the fact of the Srebrenica genocide with the clear purpose of undermining reconciliation in Bosnia and Herzegovina.

People should not be dehumanized, subjected to injustice, or targeted for hate crimes for what they look like, how they worship, where they come from, or whom they love.  All persons are born free and equal in dignity and rights.  Despite this universal truth, we see that attacks on LGTBQI+ persons, members of marginalized racial and ethnic communities, religious minorities, and other vulnerable groups are on the rise around the globe.  Violence and discrimination against any of them serve as a warning to us all – when we fail to protect the most vulnerable and marginalized, we fail us all.  We call on Turkmenistan and Uzbekistan to decriminalize consensual same-sex conduct.  We all have work to do to protect the most vulnerable among us, including ensuring no person is subjected to violence because of their sexual orientation, gender identity or expression, or sex characteristics.  We must all do better.

For many years, the OSCE has chronicled a continuing rise in hate crimes.  I urge all participating States to provide ODIHR’s Hate Crimes Unit with the disaggregated data, including on race, ethnicity, religion, gender, sexual orientation, and gender identity, which is essential to shaping effective responses.  I applaud the leadership of Senator Ben Cardin as the OSCE Parliamentary Assembly’s Special Representative on Anti-Semitism, Racism, and Intolerance, and I look forward to partnering with him, as well as with the Chair’s Tolerance Representatives, the Office for Democratic Institutions and Human Rights, and all delegations and civil society actors committed to Human Dimension values.

Let us all work together to make our common bonds of humanity stronger than the interconnectedness of hatreds.