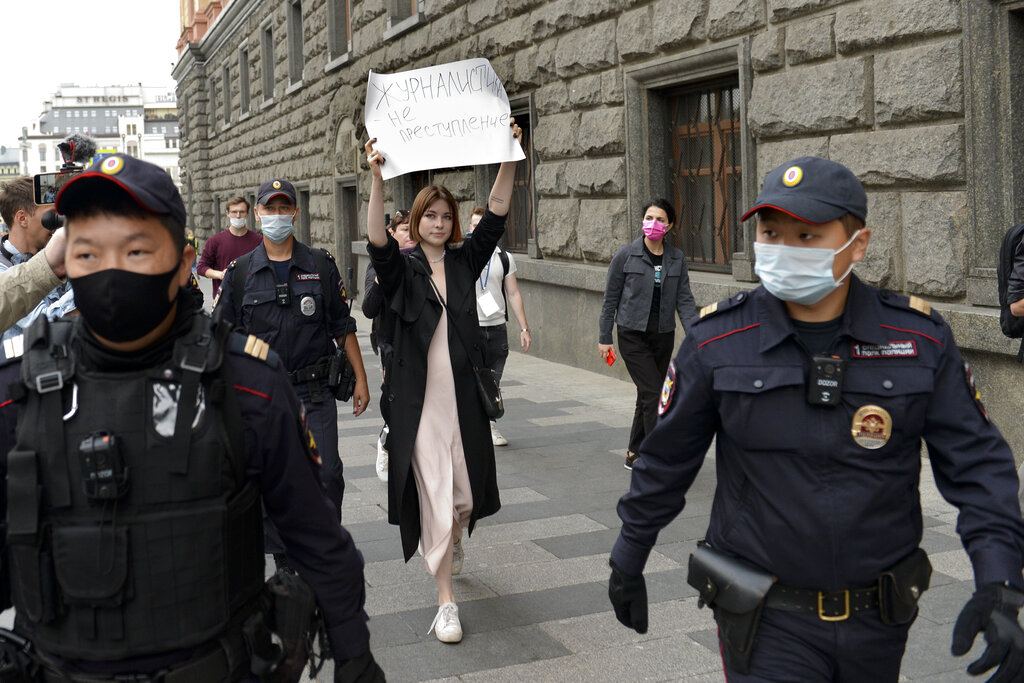 Police detain a journalist with a poster that reads" "Journalism is not a crime" in Moscow, Russia, (AP Photo/Denis Kaminev)

Freedom of opinion and expression; Media freedom; Safety of Journalists

As prepared for delivery by Ambassador Michael G. Kozak,
Head of the U.S. Delegation,
Warsaw
September 30, 2022

Wherever freedom of expression and media freedom are absent, there can be no democracy. Whenever power is unchecked by a free press, the human rights of persons and the security of States are at risk.  The answer is to fortify the free press, not to use state power to suppress content, no matter how offensive.  All OSCE participating States have the obligation to respect the right to freedom of expression, including the ability to seek, receive, and impart information and ideas of all kinds, regardless of frontiers, through media of the individual’s choosing, without interference.

The Russian Federation has long deployed financial, legal, and physical tactics to silence and intimidate the press, including harsh fines, arbitrary raids, detentions, and harassment to force the shuttering of media outlets.  Since the Kremlin’s full-scale invasion of Ukraine in February, the situation for freedom of expression and media freedom in Russia has worsened significantly.  After the first week of the invasion, Russia blocked access to major foreign Russian-language news sites such as BBC, Deutsche Welle, Meduza, and RFE/RL, as well as Apple and Google app stores.  Russia has permanently blocked access to Facebook and Instagram after a court decision labelled parent company Meta Platforms an “extremist organization.”  The Kremlin also blocked the last vestiges of independent media in Russia, broadcasters Dozhd(TV Rain) and Echo of Moscow.  As a result, the people of Russia are severely restricted in accessing accurate, credible news about the war their government is waging against Ukraine and what’s happening to their own soldiers.

Radio Free Europe/Radio Liberty was forced to suspend operations within Russia this year after a long pressure campaign by the government, including fines of more than $13.4 million for refusing to apply the onerous content-labeling required due to its “foreign agent” status.

In March, Russia imposed a law that makes it illegal to “discredit” Russia’s armed forces.  Russia’s law now also carries a criminal penalty of up to 15 years’ imprisonment for accurately calling its actions in Ukraine a “war” or “invasion” instead of a “special military operation”.

We honor the memories of the journalists – estimated to be a dozen thus far — who have lost their lives while reporting on the war.  Both Moscow Mechanism Expert Mission reports concluded that Russia’s forces deliberately targeted journalists.  Reporters Without Borders found evidence that Ukrainian national photojournalist Maks Levin and his bodyguard were executed by members of Russia’s forces, possibly after being interrogated and even tortured.  The willful killing of a journalist, like that of any civilian, is a war crime.

The assault on free media may be most flagrant in Russia, but it is happening elsewhere also.

In Belarus, Belsat TV journalists Katsiaryna Andreyeva and Daria Chultsova, and RFE/RL journalist Ihar Losik, are all unjustly serving or have served between 2-15 years imprisonment. All independent media has been exiled, detained, and/or effectively banned under “extremism” charges, and their writers, proprietors, and families have been subjected to home and office raids, fines, arrests, and harassment.  State media dominates television in Belarus.

Several participating States in Central Asia shut down Internet access during civil unrest, including Kazakhstan during its January 2022 protests, Tajikistan during protests in Gorno-Badakhshan in November 2021 and in May 2022, and Uzbekistan during unrest in Karakalpakstan in July 2022, severely limiting information about what happened.  Access to information and the ability of the media to report on issues of public concern remains severely restricted in Turkmenistan, where authorities claim there have been no COVID-19 cases and the police detained people who tried to film evidence of or report on food shortages.

Turkey continues to lead the OSCE region in numbers of journalists and media workers in prison.  Journalists face physical attacks and threats of violence.  We are deeply concerned by the rise in criminal “insult” suits against journalists, human rights defenders, government critics, and opposition politicians.  The right to exercise freedom of expression even when it involves speech which some find controversial or uncomfortable, strengthens democracy and must be protected. We urge Turkey to respect and ensure freedom of expression.

In Azerbaijan, serious restrictions on freedom of expression and on the media continue, including violence against and harassment and incarceration of journalists, the criminalization of libel and slander, and the blocking of websites such as of RFE/RL and Voice of America.  A repressive new law that would expand government control over the media was rushed through parliament in late December and went into effect in February.

In Hungary, consolidation of media under government-aligned or state-funded control has created a difficult environment for the public to get reliable, unbiased information or exchange ideas freely.

President Duda’s veto of the media ownership law last December was a vital contribution to safeguarding freedom of expression in Poland.  However, Reporters without Borders continues to raise concerns about the consolidation of state-owned outlets and its impact on the private market. We encourage the government to redouble its efforts to ensure Poland’s media environment maintains its pluralism and independence.

Democracy thrives on freedom of expression and independent voices.  Let us protect them.