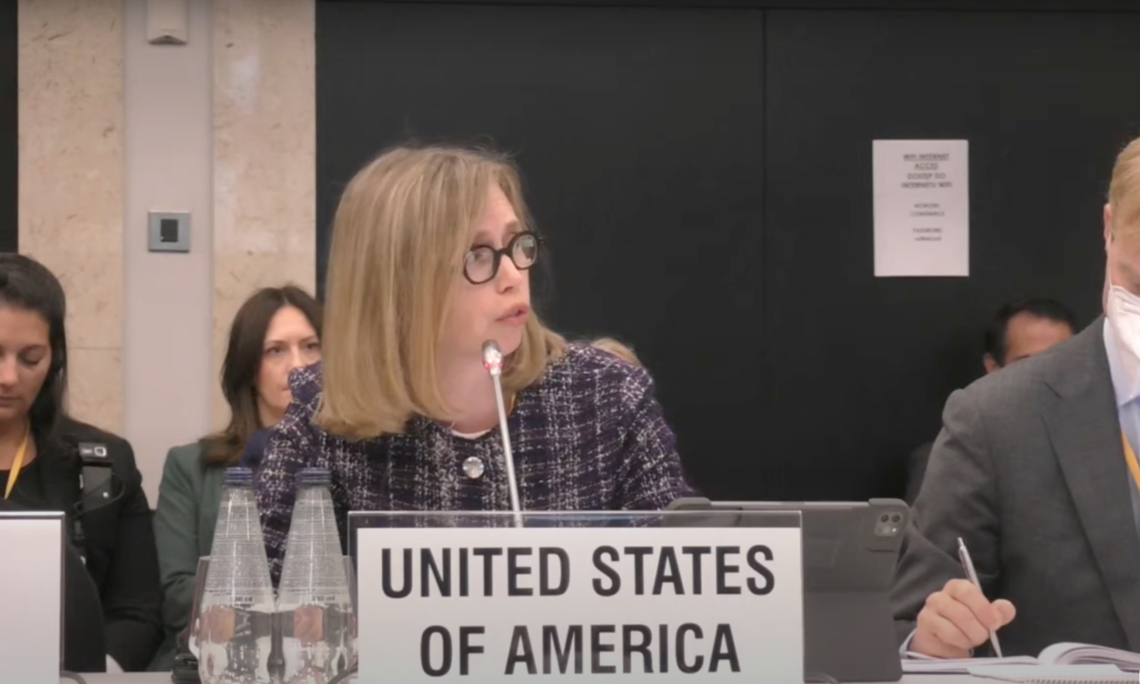 As prepared for delivery by Kara C. McDonald, Deputy Assistant Secretary of State for Democracy, Human Rights, and Labor

We all should be alarmed at the rising number of individuals in the OSCE region who have been incarcerated for exercising their human rights and fundamental freedoms.  We welcome the appointment of Helsinki Commission Co-Chairman Steve Cohen as the OSCE Parliamentary Assembly Special Representative on Political Prisoners and look forward to working with him.

The Russian Federation’s judicial system is subservient to other parts of the state, which use it as a weapon against peaceful human rights activists, independent political groups, and anyone deemed a threat to the Kremlin-imposed order.  Alexey Navalny remains in prison after a failed assassination attempt in 2020 by Russian security forces.  In 2021, the Russian Federation designated three Navalny-affiliated organizations as “extremist”, effectively criminalizing their peaceful activism and anti-corruption work.  This year, the Kremlin placed Navalny and many of his colleagues on a government list of “terrorists and extremists”, laying the groundwork for even harsher sentences.  Navalny himself is now in an isolated punishment cell.  The Russian Federation is prosecuting its citizens for peacefully protesting against the war in Ukraine.  Russian security forces arrested pro-democracy advocate Vladimir Kara-Murza in April 2022 under a pretence, but driven by Kara-Murza’s condemnation of the Kremlin’s atrocities in Ukraine.  As commonly happens, he was later charged with spreading false information about Russia’s military.  He remains in detention.

There is no independent judiciary or the possibility of a fair trial in Belarus for those who express their opposition to the Lukashenka regime’s human rights abuses or violations and its complicity in Russia’s aggression against Ukraine.  Currently, Belarus holds over 1300 political prisoners.  We call attention to imprisoned Coordination Council Presidium members Mariya Kalesnikava and Maksim Znak, former presidential candidates Viktar Babaryka and Syarhey Tsikhanouski, RFE/RL journalist Ihar Losik, and human rights NGO Viasna’s Marfa Rabkova, who are among the many unjustly incarcerated, serving terms of between ten and 18 years imprisonment.  Recently adopted legislation permits in-absentia trials, threatening activists and opposition members who have had to seek safety in other countries.

Tajikistan lacks an independent judiciary and fair trials.  There continue to be credible reports that Tajikistan practices transnational repression, and of torture and mistreatment in detention, including of defense lawyers such as Buzurgmehr Yorov.  It is important that other states take this into account when considering applications from Tajik asylum seekers who run afoul of the authorities and may, like members of the Islamic Renewal Party, find themselves imprisoned if they are returned to Tajikistan.

The United States has raised concerns about prisoners in Turkmenistan whose whereabouts are unconfirmed, including our former OSCE colleague and former foreign minister Batyr Berdiev.

We raise the case of Zhanbolat Mamai, an opposition figure unjustly detained in Kazakhstan who had been trying to register a new political party.  He faces new charges and 10 years in prison for his alleged involvement in organizing the January 2022 protests – that’s on top of previous charges for insulting an authority and distributing false information.

In Azerbaijan, we remain concerned by the lack of an independent judiciary and fair trials.  Human rights groups continue to report that the authorities hold political prisoners and detainees.  Lack of judicial independence remains a serious issue in Serbia, Bosnia and Herzegovina, Montenegro, and Turkey.

Serbia has failed to bring to justice those responsible for the murders of three American citizens – the Bytyqi brothers – who were killed while they were in police custody in 1999.  Some former officials implicated in these murders enjoy impunity and continued protection from formal investigation.  Serbian historical revisionism about the 1990s and public glorification of war criminals is a growing concern.

We commend Poland on the legislative progress made towards resolving EU concerns over its judicial disciplinary regime, and we urge rapid implementation of commitments to dismantle and reform the disciplinary chamber and provide judges already disciplined by the chamber the opportunity to appeal or be reinstated.  We also urge the government to work constructively with civil society activists and opposition figures to address remaining unsettled issues.

On a positive note, we recognize the progress on judicial reform made by Albania and Moldova.  Although political pressure and corruption have long threatened the integrity and independence of the judiciary, Albania has engaged in an internationally-monitored process of vetting judges and prosecutors, which has helped root out corruption.  In Moldova, the government continues to demonstrate its commitment to rule of law reforms, including through launching transparent pre-vetting and extraordinary vetting of judges and reforming anti-corruption institutions.