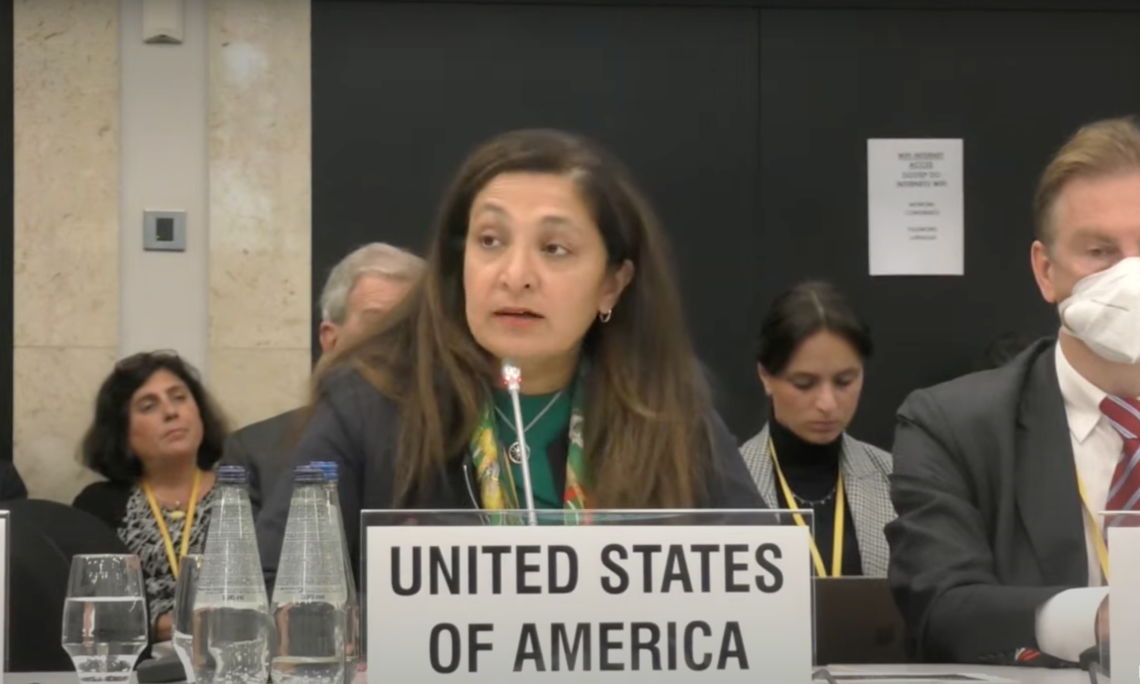 Uzra Zeya, Under Secretary of State for Civilian Security, Democracy, and Human Rights delivering delivering the U.S. Statement to the Plenary of the Warsaw Human Dimension Conference.

Humanitarian issues, including in the context of armed conflict; Refugees and displaced persons; Persons at risk of displacement; Trafficking in human beings

As prepared for delivery by Uzra Zeya, Under Secretary of State for Civilian Security, Democracy, and Human Rights
Warsaw
October 6, 2022

On behalf of the United States, I am honored today to address the human dimensions of security in the context of conflict, particularly the consequences of Russia’s unrelenting, illegal war against Ukraine. Russia’s unconscionable violation of Ukraine’s sovereignty has wrought death and destruction, endangered the region and the larger international community, and shredded the key principles on which this body was founded.

Recently, the OSCE Moscow Mechanism reports, ODIHR and the UN High Commissioner for Human Rights, have found chilling patterns of human rights abuses and violations of international humanitarian law, including evidence of war crimes committed by members of Russia’s forces. A true horror of Russia’s unjustified war has been its barbaric filtration operations and forced deportations to Russia of hundreds of thousands of Ukrainian citizens, including children. At the UN Security Council, U.S. Ambassador Linda Thomas-Greenfield delivered a powerful intervention making clear that Russia’s actions aim “to destroy Ukraine – its culture, its people, its very existence.” To further address filtration’s devastating human toll, I hosted a meeting during UNGA High Level Week with a diverse group of states to share information and build common cause.

The destructive impact of Putin’s war has reached far beyond Ukraine, with 44 million worldwide pushed into food insecurity as a result of Russia’s Black Sea blockade and pillaging of Ukrainian agriculture. We strongly support the humanitarian arrangement brokered by the UN and Turkey to resume grain shipments from Ukraine’s ports to the world’s hungry. President Biden recently announced plans to provide another $2.9 billion in U.S. support for lifesaving humanitarian and food security assistance, building on the $6.9 billion in U.S. assistance already committed this year to mitigate the global food security crisis provoked by Russian aggression.

Another grim consequence of Russia’s war is the largest and most rapid refugee crisis in Europe since the Second World War, displacing more than 14 million people – and counting. These refugee flows of predominately women and children are particularly vulnerable to trafficking and exploitation. We call on member states to confront the risks of human trafficking, to train law enforcement to recognize its signs, and to properly vet those providing assistance.

We applaud OSCE partners such as Poland, Czech Republic, Hungary, Romania, Moldova, Germany and others for providing safe haven for this unprecedented flow of refugees. We continue to urge for unfettered access to all people from Ukraine in need, including the 2.6 million refugees in Russia and the untold number of besieged civilians trapped in areas of Ukraine currently under Russia’s control and subject to its illegal annexation. The United States has provided more than $1.5 billion this year in humanitarian assistance to those in Ukraine and in the wider region, including emergency health care, food, and water, amongst other services. As Russia’s aggression litters Ukraine with explosives, the United States is supporting Ukraine’s humanitarian demining efforts by providing more than $90 million in assistance over the coming year.

To close, I thank the OSCE governments and civil society partners that are addressing the epic range of humanitarian issues resulting from this unjustified war. The United States will continue to partner with you and stand united with Ukraine, upholding OSCE principles of building democratic institutions, ensuring respect for human rights, and maintaining the rule of law.