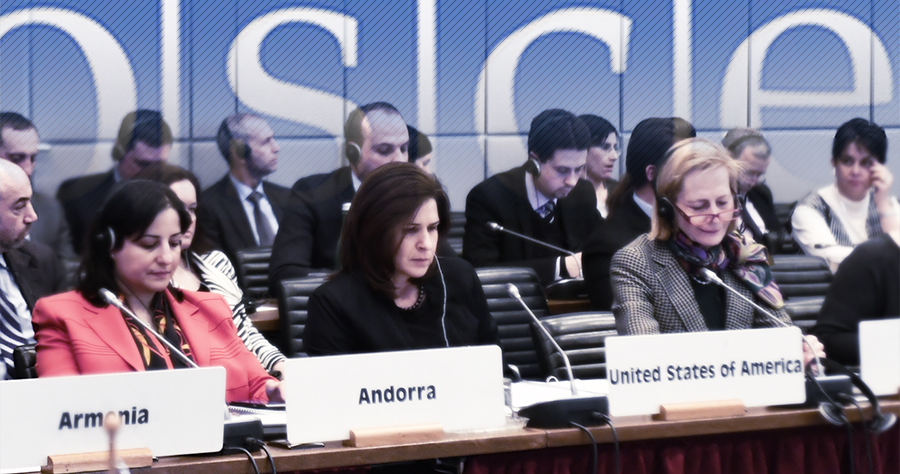 Women in the OSCE

In 1975, thirty-seven countries signed the Helsinki Final Act — a visionary document heralded as groundbreaking for its recognition that human rights and peace and security are two sides of the same coin. Though it wasn’t unusual at the time, in retrospect it is notable that — despite the immense contributions of women to the advancement of democracy and human rights even at that time — not one of individuals who signed the document on behalf of a signatory country was a woman. Diplomacy was, by and large, a career field reserved for men.

Today women are fully integrated into all aspects of the Organization for Security and Cooperation in Europe’s work. In Vienna and the field, the OSCE considers gender diversity a source of strength — and continues to work to ensure we make the most of the immense talent and expertise of our female colleagues. Nineteen of the OSCE’s 57 participating States are represented by women Heads of Delegation. Austria’s Christine Muttonen is President of the OSCE Parliamentary Assembly. Women leaders have been at the helm of the OSCE’s most important institutions, like Dunja Mijatović, who for seven years served as the vocal, courageous Representative on Freedom of the Media. The OSCE Missions to Montenegro, Ashgabat, Skopje, and Tajikistan are all led by strong female Ambassadors. Experts like Kazakhstan’s Madina Jarbussynova spearhead the Organization’s work on countering Trafficking in Human Beings. The OSCE’s human rights committee is chaired by a woman — UK Ambassador Sian MacLeod, building on the work of Finland’s Katja Pehrman.

The OSCE is also advancing gender equality and women’s issues on the international stage — helping OSCE participating States implement the powerful human rights language in its charter. Recognizing the critical role women in the full array of security issues from conflict resolution to countering violent extremism, this month the OSCE brought together women parliamentarians and civil society representatives in Vienna at an “OSCE Security Policy — Female Perspectives” conference. In the field, the OSCE also connects gender equality to peace and security in practical ways, including by appointing female monitoring officers to the Special Monitoring Mission to Ukraine to ensure the mission reports and activities reflect diverse perspectives.

At the OSCE, we’re proud to have a terrific network of men as partners in the fight for women’s equality. In 2012, with the support of the United States, the OSCE launched the MenEngage Network to encourage men across the OSCE region to serve as positive role models on gender issues. This year, on International Women’s Day, the United States signed on to the MenEngage statement to the OSCE Permanent Council, which called on men to speak out against violence against women and girls — human rights violations with high social and economic costs that affects us all.

The advancement of women’s rights and gender equality are principles the United States shares with the OSCE and its participating States. We uphold these principles not only because they are the right thing to do, but because research and history have shown that when women are free to participate in a country’s economic, political, and social spheres, all of society benefits. Countries that respect women’s rights as human rights are more likely to be peaceful, stable, and prosperous. Those countries make better partners for the United States.

Women may not have signed the Helsinki Accords four decades ago, but today they carry forward the mantel of their predecessors with courage, professionalism, and determination. I am honored to have them as my partners and colleagues as we work to engage women in all aspects of the OSCE’s work and to advance peace, security, and prosperity from Vancouver to Vladivostok.

Kate Marie Byrnes is Chargé d’Affaires, a.i. at the U.S. Mission to the OSCE.