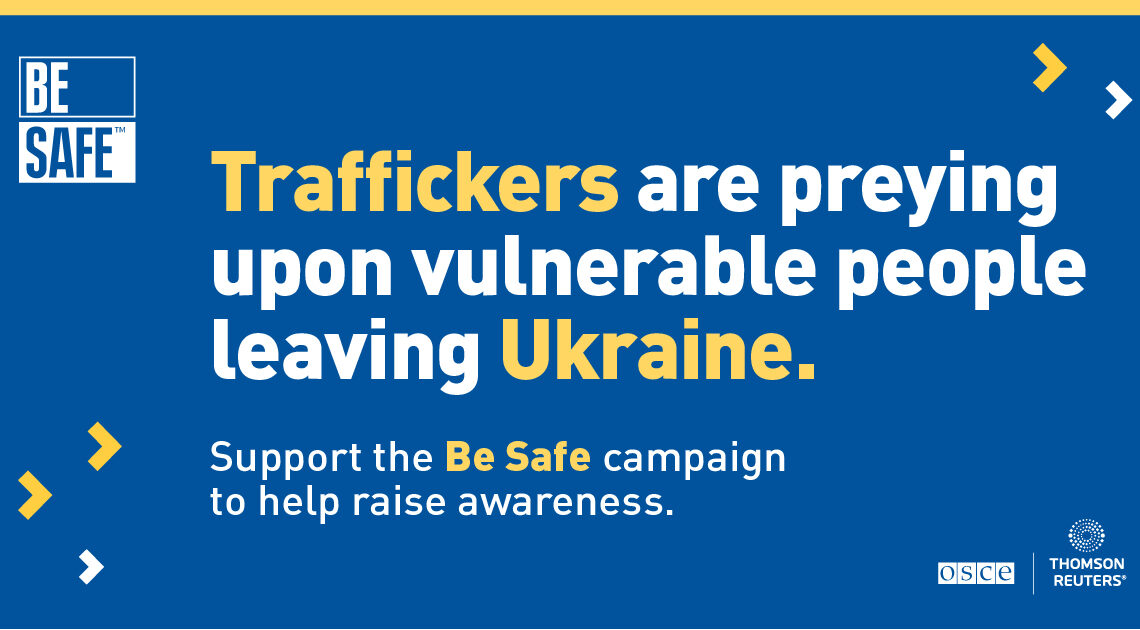 Russia’s brutal war against Ukraine has led to a catastrophic refugee and humanitarian crisis that has created the conditions for a human trafficking crisis.

World Day Against Trafficking in Persons

The United States joins the United Nations, participating States, and nongovernmental organizations around the world in commemorating July 30 as World Day against Trafficking in Persons.

This year’s theme, “Use and abuse of technology,” focuses on the role of technology as a tool that can both enable and impede human trafficking.  We would like to commend both the OSCE’s Office of the Special Representative and Coordinator for Combating Trafficking in Human Beings and Office for Democratic Institutions and Human Rights’ (ODIHR) anti-trafficking unit for taking proactive steps to highlight the dual role technology plays in strengthening anti-trafficking capabilities but also, unfortunately, how it provides new platforms for traffickers.  Technology’s positive and negative implications for combating human trafficking were also highlighted in last week’s Supplementary Human Dimension Meeting on Protecting the Rights of Trafficked Persons, and we are grateful to the Chair, Secretary General, and ODIHR for holding that successful event.

Last week’s meeting highlighted that internet and digital platforms provide traffickers the mechanisms to recruit, exploit, and control victims.  These platforms also allow traffickers to:  attract potential clients; communicate with other traffickers; make arrangements to bribe complicit public officials; and move their ill-gained proceeds with greater speed, reach, cost-effectiveness, and anonymity than ever before.

But technology can also help law enforcement to track human trafficking networks, enhance prosecutions with digital evidence, and provide access to support services to survivors.  Law enforcement can also use technology as a platform for prevention and awareness-raising activities on the safe use of the internet to help mitigate the risk of online-facilitated human trafficking.  The internet also helps to provide victim-centered and trauma-informed training for stakeholders and others who may come into contact with trafficking victims, while also providing a platform for survivors to help guide and inform the anti-trafficking movement.  And as evidenced by yesterday’s launch of the Office of the Special Representative for CTHB’s bold “Be Safe” digital awareness campaign supporting the needs of Ukrainians who left or will leave their country and could find themselves at risk of exploitation and trafficking, technology can provide lifesaving information to refugees in the main countries of destination and transit.

The Supplementary Human Dimension Meeting last week also underscored how Russia’s brutal war against Ukraine has led to a catastrophic refugee and humanitarian crisis that has created the conditions for a human trafficking crisis.  We must all do all we can to protect Ukrainians and others fleeing Russia’s aggression.  Most displaced persons and refugees are women and children who are particularly vulnerable as they search for accommodation and employment. And as we heard throughout the event in first-person accounts, Russia’s forced deportations of civilians, including unaccompanied minors, and its filtration operations, further exacerbate the threat of trafficking of Ukrainian citizens.

Last week the United States released the 2022 Trafficking in Persons Report, which highlights and emphasizes the importance of meaningful survivor engagement and leadership.  The report underscored that survivors’ perspectives and expertise should be prioritized in all stages of policy development to address this crime and craft better responses to it. We encourage participating States to incorporate survivor input into their anti-trafficking policies early and often.

We applaud the International Survivors of Trafficking Advisory Council (ISTAC) launched last year by ODIHR.  ISTAC provides the OSCE and its participating States with a unique and valuable mechanism to engage survivors as we strengthen the OSCE’s anti-trafficking efforts.

Finally, we call on participating States to continue to support the important work of this Organization and reaffirm the OSCE’s leading role in combating human trafficking.  Both the Office of the Special Representative and Co-ordinator for Combating Trafficking in Human Beings and ODIHR’s anti-trafficking unit are providing vital assistance to victims and survivors of trafficking, as well as building capacity for government entities and civil society.  As Russia’s heinous war against Ukraine continues, we have an urgent responsibility to step up our fight against all forms of trafficking in persons.