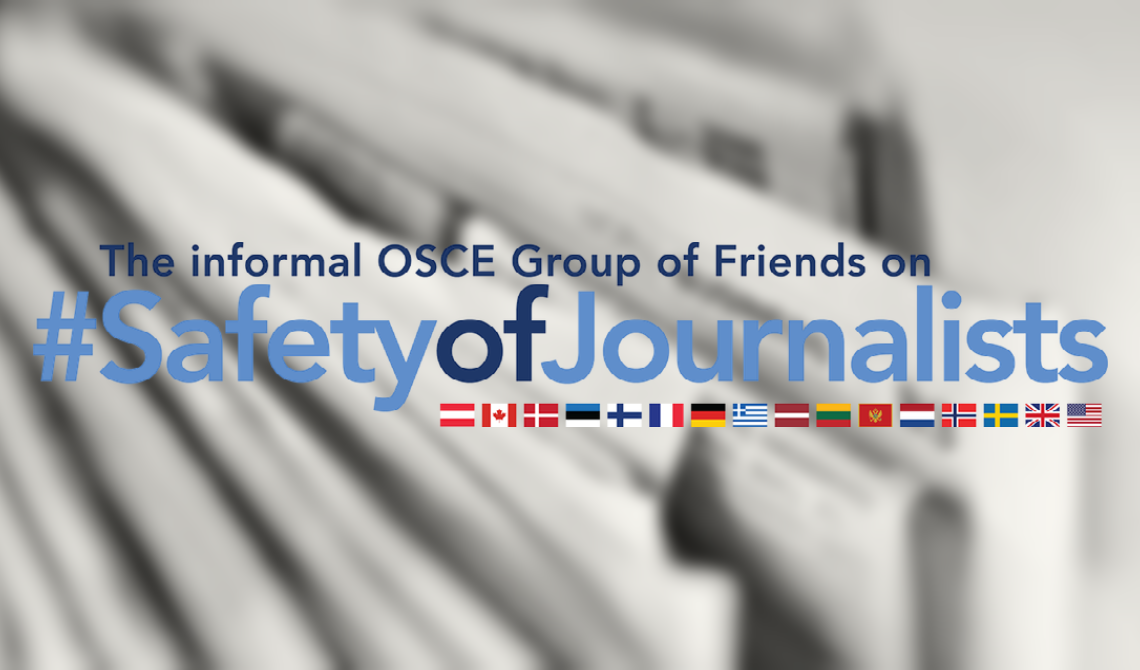 Statement Of the informal OSCE Group of Friends on the Safety of Journalists on the International Day to End Impunity for Crimes Against Journalists on 2 November.

World Press Freedom Day 2022: Statement by the informal OSCE Group of Friends on Safety of Journalists

As delivered by Gesa Bräutigam, German Ambassador to the OSCE

I am speaking on behalf of Austria, Canada, Denmark, Estonia, Finland, France, Germany, Greece, Latvia, Lithuania, Montenegro, the Netherlands, Norway, Sweden, the United Kingdom, and the United States of America, a group of participating States devoted to the safety of journalists. I am speaking on the occasion of World Press Freedom Day, a day the members of the United Nations have collectively devoted to press freedom and to honour the courage of journalists and media actors from all over the OSCE region for their work.

The right to freedom of expression as exercised by journalists and media actors is crucial to democracy, and the rule of law as well as the protection and promotion of all human rights. Without independent, free, and pluralistic media both online and offline, citizens’ ability to hold those in power to account suffers. The ability of journalists to work safely allows all persons to obtain information that can inform and educate and maintain peaceful, inclusive, and equitable societies.

In too many participating States, however, journalists and media actors continue to be harassed, intimidated and even killed. In too many cases, threats of violence and attacks against journalists and media actors are not investigated and prosecuted as thoroughly as we committed to in Milan in 2018. This emboldens the perpetrators of crimes and has a further chilling effect on freedom of expression in our societies.

Mr. Chair,
Today, we particularly condemn the flagrant and systematic assault on media freedom and independent journalists by the Russian Federation and Belarus.

In the session of the Permanent Council on 7 April, we brought to its attention the cruel fate of journalists and media actors – at least 7 as of now – who have been killed since 24 February in the course of their journalistic work, while covering the Russian Federation’s aggression against Ukraine. Professors Benedek, Bílková, and Sassòli have elaborated on these cases in their report of the Moscow Mechanism, stating that: “There are also many cases where journalists have been detained or abducted by the Russian forces”, and quoting “well documented and verified” NGO reports concerning cases of ill-treatment and use of methods amounting to torture against journalists and media actors. We strongly condemn these violent assaults on journalists and media actors as well as all efforts to silence independent media coverage within the Russian Federation itself. We are deeply concerned about the exploitation of the media to spread harmful disinformation and the use of draconian media restrictions, all of which curtail freedom of expression and deprive individuals of their right to access independent news and factual information. We echo the Representative on Freedom of the Media, Ms Ribeiro, who in her statement dated 16 March, warned against “measures taken by [… Russian Federation] authorities that have wiped out media freedom and drastically infringed on the safety of journalists in […Russia]”, qualifying it as “one of the worst declines in media freedom” since the creation of her mandate.

We urgently call on the Russian Federation to immediately end its attacks on independent media at home and abroad and to respect the rights of journalists and media actors in accordance with international human rights law, international humanitarian law and OSCE commitments and to cease its massive disinformation campaigns. We commend the courage of all journalists and media actors who, at great personal risk and sacrifice, continue to report the facts and bring Russia’s human rights violations and abuses, as well as war crimes, to light.

The situation for journalists and media actors in Belarus is similarly dire. As of today, 25 of them remain imprisoned according to trustworthy sources in civil society. However, despite the risk of lengthy prison sentences and prolonged detentions, courageous independent media and individual journalists strive to inform their compatriots and the world about what is happening in Belarus. We stand with them and echo Ms Ribeiro’s call to free all journalists and other media actors who have been arbitrarily sentenced, arrested, or detained in Belarus.

Mr. Chair,
We call on all participating States to cooperate and to implement our OSCE commitments on media freedom, and safety of journalists. We applaud those governments that have taken decisive steps to strengthen the protection of media freedom. We remain committed to promoting media freedom and to standing up against any efforts to undermine it.

Mr Chair,
I kindly request that this statement be attached to the journal of the day.