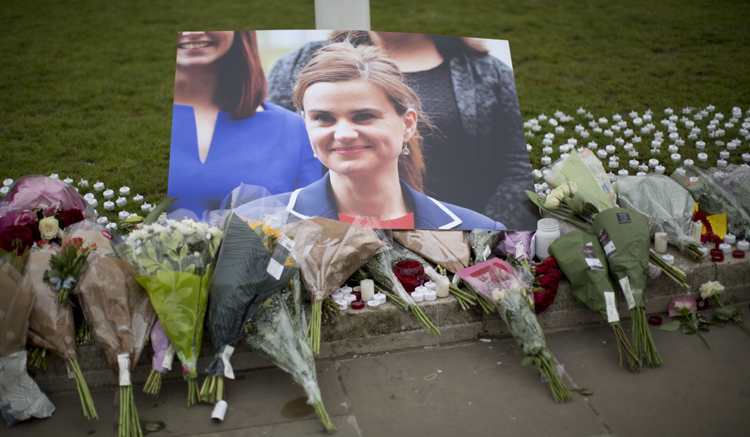 An image and floral tributes for Jo Cox, lay on Parliament Square, outside the House of Parliament in London, Friday, June 17, 2016. (AP)

In recent years it has been a priority of several OSCE chairmanships—not to mention many participating States—to engage young people as we seek to tackle shared challenges and make the most of common opportunities.

Young people are often the foot soldiers of progress—whether leading advocacy campaign to drive positive democratic change, starting and running NGOs that defend human rights and provide social services, or on the frontlines in humanitarian efforts, often at personal risk and far from home.

One of the benefits of democratic governance is that it provides an opportunity to leverage the perspectives of persons with different backgrounds and experience to better inform the making of effective and just laws and policies. Our democracies are stronger when young people don’t just press our governments to do better, but are willing to run for office, to work as civil servants, to be leaders in the military—these are all ways to be agents of positive change too.

Jo Cox, a United Kingdom Member of Parliament, was tragically assassinated last Friday. Yesterday would have been her 42nd birthday. She epitomized the kind of young, rights-oriented, innovative leader that many of us think about when we talk about engaging young people. She had been a leader in civil society—as head of policy for Oxfam—and a key voice advocating for refugees, from Syria, Yemen, Sudan and elsewhere. She had championed the rights of women and girls and fought against human trafficking.

As Lotte Leicht and David Mephamgleny of Human Rights Watch put it last weekend, Ms. Cox “never stopped reminding those in power that they could make choices to affect people’s lives in a positive way. She was in so many ways a visionary leader, and humanity was her guiding principle.”

Our societies, and the world, need more leaders like Jo Cox—more young people who press for progress and are willing to stand for election, to work within parliaments and governments to do the hard work of making change within our democracies.

The U.S. Delegation wishes to pay tribute to the example that Jo Cox was and is for young people across the OSCE area. In her maiden speech to Parliament, just a year ago, Ms. Cox remarked that “Our communities have been deeply enhanced by immigration. While we celebrate our diversity, what surprises me time and time again as I travel around the constituency is that we are far more united and have far more in common with each other than things that divide us.” We join Jo Cox’s widower, Brendan, in calling for renewed work to counter hate and intolerance, and to build societies grounded in human dignity and human rights that unite us all. And we honor the memory of Jo Cox and extend our deep sympathy to her family and friends and to the people of the United Kingdom.